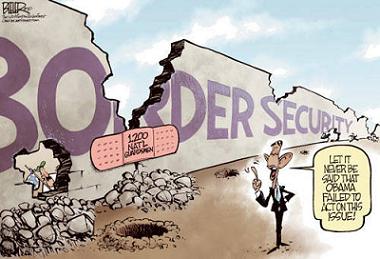 A website run by the federal government (“WelcomeToUSA.gov“) encourages new immigrants to the United States to apply for welfare benefits.  Operated by the Department of Homeland Security, this website  “is the U.S. Government’s official web portal for new immigrants.”

On the web page immigrants are told that  “Depending on your immigration status, length of time in the United States, and income, you may be eligible for some federal benefit programs. Government assistance programs can be critically important to the well-being of some immigrants and their families.  Frequently, however, there is a lack of information about how to access such benefits. Benefit programs can be complicated and you may be given misleading information about how they operate.”     The page also contains a list of links where new immigrants can find instructions about how to apply for programs such as Medicare, Medicaid, Social Security, Food Stamps, Supplemental Security Income and Temporary Assistance for Needy Families

America is a nation of immigrants and immigration has been very good to this country.  But at a time when there are millions upon millions of American citizens out of work and at a time when we are absolutely drowning in debt, do we really need to encourage millions more immigrants to come over and take advantage of our overloaded social welfare programs?

Of course not all immigrants are eligible for all of the available  programs, but if an immigrant can get over to the U.S. and just get signed up for a couple of programs they can enjoy a higher standard of living doing nothing here than they can working at a low paying job back home.

We have created a perverse system of incentives that makes it very attractive to people all over the world to do whatever they can to hitch a ride on “the gravy train” and take advantage of all of the benefits that they possibly can.  And once immigrants get on welfare, many of them never leave.  A  study discovered that 43 percent of all immigrants who have been in the United States for at least 20 years were still on welfare.  We can’t even take care of our own citizens, and yet more immigrants hop on to the safety net every single day.

Today,   53 percent of all college graduates under the age of 25 are either unemployed or underemployed.  Many of them are absolutely desperate for work.  Overall, there are more than 100 million working age Americans that do not have jobs.   Millions of illegal immigrants are occupying jobs that could otherwise be held by American citizens.  Many employers prefer to hire illegals because they work for a lot less money.

When you have a lot more workers competing for the same number of jobs, –  wages go down.   Several decades ago a roofer could live a nice middle class  lifestyle and support an entire family on one income.  But today that is no longer the case.  So what has changed?  A flood of illegal labor has entered the marketplace.

Every year, illegal immigrants receive tens of billions of dollars in welfare payments.  They get free food assistance, free housing assistance, free health care benefits and free education for their children.  Overall, it has been estimated that U.S. taxpayers spend $12,000,000,000 a year on primary and secondary school education for the children of illegal immigrants.

Illegal immigrants are overwhelming emergency rooms all over the country.  They walk in, receive high quality treatment and often never pay after they leave.  Things have gotten so bad in many areas of the nation that it is causing entire hospitals to go bankrupt and shut down.   Thanks to illegal immigration, California’s overstretched health care system is on the verge of collapse.  Dozens of California hospitals and emergency rooms have shut down over the last decade because they could not afford to stay open after being endlessly swamped by illegal immigrants who were simply not able to pay for the services that they were receiving.   As a result, the remainder of the health care system in the state of California is now beyond overload.  This had led to brutally long waits, diverted ambulances and even unnecessary patient deaths.    Sadly, the state of California now ranks dead last out of all 50 states in the number of emergency rooms per million people.

Instead of looking out for the American people, many liberals on both sides of the isle  support legalizing illegal immigration because it will give the Democratic Party more support at the polls.  This is incredibly selfish and self-serving, but this is the way that the political game is played in 2012.

Far more people move into the United States illegally than come in through the legal immigration process.  As word spreads of the “Obama amnesty”, millions more will come on over.  After all, what would they have to lose?  If they get caught crossing over they will just get nicely sent back and can try again in a few days.

Thanks to Obama, the odds of deportation are now very slim.  And they can often make significantly more money in the “underground economy” in the U.S. than they can back home.

You can read Michael Snyder’s article in full at this link.

Thanks to Obama’s backdoor approach to amnesty, his deferred action and work authorization order for illegals, 308,935 applications from illegal aliens under the age of 31  have been received and 53,273 have been approved  as of November 15.