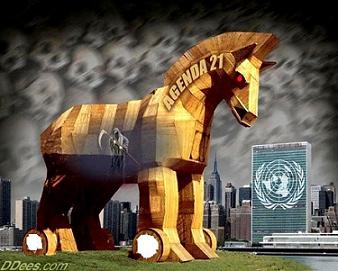 We’ve know for years that the  federal government  was hell-bent on removing any local control and input from average American citizens concerning what you can do with your own land,  private property, local schools, and local infrastructures from bridges to meeting houses through the U.N. Agenda 21 Sustainable Living standards.

In the Consolidated Appropriations Act, 2010, Pubic Law 111-117, Congress  gave HUD a $150 million carrot to dangle in front of liberals who were willing to sell their local governments to the United Nations.  Already, counties across the nation are being REGIONALIZED to circumvent the structure and policies of local governance.  It is an insidious program operating under the radar that is being implemented  in Florida, New York, Maryland, and in cities such as Seattle, Washington; Austin, Texas;  Salt Lake City, Utah;  and Chicago, Illinois.

The Sustainable Communities Regional Planning Grant Program operated by the U.S. Department of Housing and Urban Development, Office of Sustainable Housing and Communities, is offering to support metropolitan and multijurisdictional planning efforts that integrate housing, land use, economic and workforce development, transportation, water and infrastructure investments.  Of course HUD will be working with the Department of Transportation, the EPA and Socialists at the local level to implement these Agenda 21 communities that will control every aspect of your life.

Agenda 21 is the global blueprint of implementation for Sustainable Development  devised by the United Nations and was signed by 178 world leaders at the Earth  Summit in Rio de Janeiro, Brazil in 1992.  It is a complete  reorientation of the world system of governance in every area in which humans  impact  the environment.  Sustainable  Development views traditional capitalism and the American way of life as a failing  and inequitable system that must be replaced with a new governance system  in  order to achieve sustainability and a socially just world.  It promotes a change  in attitudes away from the  norm of national borders and individual nation-states toward a globalist,  collective, one-world, interdependent, and interconnected planetary mindset.

Sustainable Development, like Communism or Fascism, is a  doctrine or philosophy of governance complete with its own agenda, beliefs, and  goals.

It  is entrenched  throughout our government at every level from federal, state and regional  agencies to county, city and community councils and planning boards and is often promoted with a friendly  environmental message of “going green”, or “being a  good steward,” where,  in reality,  there is actually a much deeper political  philosophy of control  to create a perceived crisis  of global warming,  overpopulation, global poverty  and wealth inequality,  and rampant environmental  destruction in order to  promotes high  density, urban, pedestrian oriented, low carbon, walkable communities and  discourages traditional American automobile usage, suburban lifestyles and  development.

Almost  every College or University, as well as your local school system  has become indoctrinated with the  philosophy.  Educational  infrastructure and  administration as well as student life and the curriculum  are awash in this radical, collectivist philosophy.

Dr. Ileana Johnbson Paugh wrote that on her recent trip to Europe she experienced the numerous chilling effects of Agenda 21 such as low wattage CFL bulbs that made it almost impossible to see; smart meters that turned off air conditioning to save power during 90 degree heat;  cell phone towers perched atop high rise tenements; outrageous electrical rates that discouraged the use of appliances we take for granted;  a shortage of crops because fields had been claimed for wind mills; $10 a gallon gas and extensive enviromental taxes on everything.

Really people, is this the kind of country we want to live in?  Do we want to give up our wealth, our military weapons,  the ability to defend ourselves, our economic freedom, our property, our country, our way of life, and sovereignty to the United Nations, run by tin pot third world dictators, in the name of “social justice” dictated by Agenda 21?

“If we are to stop the transition toward  this impossible utopian world we must first awaken and face the reality and  seriousness of the situation our nation and the world are in so that we may  rise to the occasion, raise the banner of faith and freedom high and stand  firmly against the onrushing darkness at hand.”  -Darin Moser

← Benghazi: Conspiracy To Bring Down The U.S.
DOMA Hits The Supreme Court →