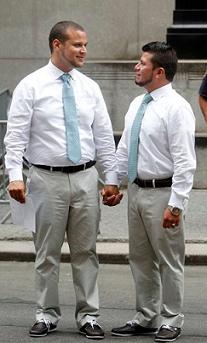 I don’t know whether to be excited or depressed.  The Supreme Court announced on Friday that it will hear two cases on same sex marriage.

One is Hollingsworth v. Perry, which asks the question of whether the Fourteenth Amendment of the U.S. Constitution contained an implied fundamental right to gay marriage, such that no state may define marriage as the union of one man and one woman and all laws to that effect are unconstitutional.  The Court has ordered the parties to argue whether the supporters of California’s Proposition 8 have standing under Article III of the Constitution to defend Prop 8 in court when the governor and attorney general of California declined to defend their own state constitution.

The second case  is United States v. Windsor, which asks whether Section 3 of DOMA—saying that marriage is between one man and one woman for purposes of federal law—violates the Fifth Amendment of the Constitution.

After a three-state victory on November 6, some liberals believe the matter is already settled. “To me,” said ABC News’s Matthew Dowd, “the consensus has already emerged on this issue. It’s just a question of… is the Supreme Court going to catch up, or get ahead of it, or put a block in the path of it?”

Three states does not a consensus make.   The Left has a long way to go to catch up to the block of 41 states that define marriage as the union of a man and woman–30 by constitutional amendment.  People like Dowd must think that if you repeat these lies often enough, people will start believing them. Unfortunately for him, the opposition to same-sex “marriage” isn’t fading.

The nation will find that out soon enough if the Supreme Court overturns the marriage laws in 41 states. A decision like that would be more divisive than Roe v. Wade, which did anything but “settle” the abortion issue. Why? Because marriage policy, unlike abortion laws in the 1970s, has already been incorporated into the constitutions of a majority of states by the votes of the people. If the justices void those laws and amendments in July, it not only undermines our most fundamental social institution–but democracy.

If you want Socialism, abolish marriage. If you want “Julia” to be the future of America, vote against the civil institution of marriage.  Traditional marriage is a great institution. And it’s never been in greater danger.

Many people mistakenly believe that proposals to allow same sex marriage are about allowing a new, different and separate form of marriage to coexist alongside traditional marriage. They envision it as a different expression of the same marriage institution they have always known. However, that is a fundamental misunderstanding of the legal issues involved.

Under the law, one definition of marriage could not exist alongside the other. Only one of the competing definitions would legally exist.  A Harvard Journal of Law and Public Policy review noted that “. . .once the judiciary or legislature adopts the union of any two persons as the legal definition of civil marriage, that conception becomes the sole definitional basis for the only legal sanctioned marriage that any couple can enter into, whether same sex or man-woman.  Legally sanctioned genderless marriage, rather than peacefully coexist with traditional one man-one woman marriage, actually displaces and replaces it.”

Let us pray that in the end, the U.S. Supreme Court will recognize that our founding fathers never created–or even implied–a right to redefine marriage in the Constitution.