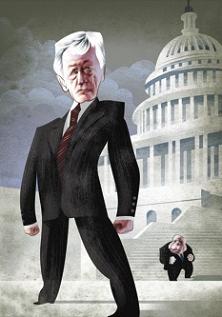 Republican Chuck Hagel,  66, a Vietnam Vet and former two term Republican Nebraska senator,  is supposedly on the short list to succeed Secretary Leon Panetta at the Department of Defense, and he  is reportedly being vetted by the Obama administration. This should be no surprise:  Hagel has been putting himself in position for a top cabinet post and has warmed  noticeably to the Democratic party over the past four years.

Hagel decided not to seek reelection to the Senate in the fall of 2007 and in  2008, his name was floated as a potential running mate for Obama.   While Hagel didn’t endorse a presidential candidate in the 2008 election,  he did  criticized his  former colleague, Sen. John McCain, for his hawkish statements on Iran.  In  2009,  Obama appointed Hagel as co-chair to his  Intelligence Advisory Board.  Hagel also sits on Deutsche Bank’s Americas Advisory Board, which the Free Beacon points out is reportedly being investigated for violating sanctions against Iran.  Deutsche Bank denies the allegations.

Brookings Institution Senior Fellow Michael O’Hanlon said that Hagel was experienced, capable and independent-minded, all good qualities. But he said he was wary that bringing a Republican like Hagel into the Cabinet would help with the politics of national security. His opposition to the Iraq surge “will cast his judgment into some doubt among some Republicans in particular, further reducing the odds that his appointment would do anything to change the tone in Washington or help Obama build a bridge to the GOP, if that was part of the thinking in considering Hagel.”

Hagel’s break with Republicans on Iraq and other foreign policy issues while serving in the Senate   put him at odds with McCain who  was a staunch supporter of the Iraq surge and has been Obama’s chief foreign policy critic.

The Republican Jewish Coalition isn’t excited with Obama’s choice either.   Picking Hagel  “could be construed as a gesture of indifference — if not outright contempt — toward Jewish Americans and every American who supports a strong U.S.-Israel alliance.”  Hagel’s refusal to label Hezbollah a terrorist organization and  his vote  against  designating Iran’s Revolution Guard as a terrorist organization didn’t win him any friends.

Then there was that nice little speech he made during the Senate debate about the surge where he seemed to justify terrorism by the Palestinians “who have been chained down.  Senator Hagel often appears before Arab-American groups to air his views regarding the Middle East.  Among his gems of wisdom —   support for Israel shouldn’t be automatic. .

The prospect of Hagel in such a high-level position may be a greater  cause for concern for the state of Israel seeing as he has been accused of castigating the Jewish state while also downplaying the threat of its enemies.  “He is one of the most hostile critics of Israel that has ever been in the Senate,” according to  Morton Klein, President of the Zionist Organization of America.  A top Republican aid said “Hagel has made clear he believes in the existence of a nefarious Jewish lobby that secretly controls U.S. foreign policy. This is the worst kind of anti-Semitism there is.” And, according to a Senior Congressional aid “if Hagel is nominated by Obama, it will be broadly viewed as a signal that the U.S. is not going to use military force to stop Iran from getting Nuclear weapons.”

I don’t want to leave you with the impression that everyone hates Hagel’s record on Israel. The same NJDC article did cite one group that supported Hagel’s Middle East efforts–CAIR, the American organization created by the Muslim Brotherhood is a fan.

On Thursday night (Dec 13), hundreds of American Jewish leaders visited the White House to celebrate Hanukkah, but many also came with a less celebratory agenda: They were there to deliver a warning to President Barack Obama about the potential nomination of former Sen. Chuck Hagel.  One Democrat in attendance predicted the fight over Hagel would be “Susan Rice times 10.

Republicans are gearing up for the fight against Hagel’s nomination, despite his fading ties to their party.  “Republicans will now turn their attention to blocking a potential Hagel nomination,” said one Senate GOP foreign policy aide, “which could become an ideological litmus test on foreign policy for both Republicans and Democrats.”

The Secretary of Defense is a key player in our fight against terrorism  —   yet Hagel apparently doesn’t believe there are any terrorists except for Jewish Lobbyists.    This man cannot be the best choice for America.   But then, come to think of it, Obama has not made  many good choices for America so don’t expect that to change!

What next?  A racist running the Department of Justice or  a Socialist as Secretary of State?  Oh, right – we already have that don’t we?

1 comment for “Chuck Hagel, An Anti-Semitic Secretary of Defense?”