When former Gov. and current Senator Joe Manchin (D-WV) changed positions on the assault weapons ban post-Connecticut school shooting, he justified the change by saying, “I don’t know anyone that needs 30 rounds in a clip to go hunting.”

He also said that he doesn’t know “anyone in the sporting or hunting arena that goes out with an assault rifle.”

Shortly after these statements, pictures of then-Gov. Manchin shooting an AR-15 with a 15 to 20 round clip, red dot sight, flash light, and a collapsible stock were sent to Breitbart News. 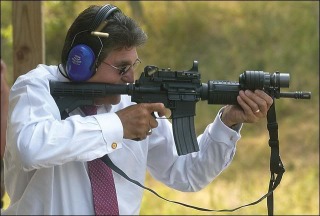 They’re good pictures. The problem is, they’re pictures of hypocrite — pictures of yet another politician who’s rule appears to be “do as I say, not as I do.”

Here are some other quick points:

Firstly, Manchin makes a massive error in judging guns and gun-accessories based on their relation to hunting. Our Founding Fathers did not seek to protect the right to keep and bear arms so we could hunt. Rather, they put the 2nd Amendment in place to shield our right to have and use firearms so we could defend our lives and our property, and so we could repel a tyranny. To reduce 2nd Amendment rights to hunting purposes is as dangerous as it is baseless.

Secondly, as I said during a guest spot on America’s Radio News Network on Monday, a 30 round clip is actually a very viable clip for home defense. To understand this, just imagine three armed men kicking in the front door of your house while you’re eating dinner with your family. All three are armed with guns that hold 7 to 10 rounds apiece, so you’re up against 21 to 30 rounds. At that point, which clip do you want in your AR-15? A 10 round, a 20, or a 30?