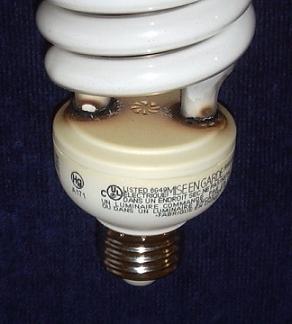 Update on the dangers of CFL’s:  According to a recent study, compact fluorescent light bulbs emit high levels of ultra violet radiation.  Research at Long Island’s Stony Brook found that the bulbs emit rays so strong that they can actually burn skin and skin cells.

Exposure to the bulbs could lead to premature aging and skin cancer, according to doctors.

In every bulb that researchers tested they found that the protective coating around the light creating ‘phosphor’ was cracked, allowing dangerous ultraviolet rays to escape.

During the Senate Energy and Resource Committee meeting on March 10,  2011, Senate Rand Paul laid into an Energy Department bureaucrat Kathleen Hogan, deputy assistant secretary of energy, efficiency over the federal government’s seemingly insatiable appetite for controlling our lives.  It is a must see video.

A 2007 energy conservation law  that George Bush signed  phased  out the sale of incandescent light bulbs beginning in 2012 when  you were no longer able to purchase  100 watt incandescent bulb.  By  2013, 75 watt bulbs will be gone and the balance will be phased out in 2014, with the exception of appliance bulbs, 3 way bulbs and plant lights.

Republicans wanted to repeal the law and Democrats whine that the new standards are crucial to save energy and spur investment in new, more efficient lighting options.  But at what cost?

Democrats and the lighting industry tell us  that the 2007 law would not ban the use of incandescents or force consumers to use compact fluorescents. In essence, what they say is true but the reality of the law is altogether different.  Politicians are not going to admit that they may have jumped the gun by effectively banning something without a safe alternative. And, of course, the lighting industry loves it because they know the CFL’s do not fit most overhead fixtures or fans.

You can’t buy something that no one stocks! Some major retailers  started phasing out incandescent bulbs long before the ban went into effect.   I did not have even one overhead fixture or fan in my home that CFL’s would  fit so  I, like most consumers, stocked up on those “nasty” incandescents.

CFL’s contain mercury.  The Department of Energy wants you to use a bulb in your home that contains Mercury, which according to the EPA “has long been known to have toxic effects on humans and wildlife.  It is a toxic, persistent bio-accumulative pollutant that affects the nervous system.”

If you break a CFL you need to follow a few guidelines to clean it up.

Besides the hazard,  CFLs  flicker which can cause headaches, migraines, eye strain, and discomfort.   The quartz arc tube creates light by generating a considerable amount of ultraviolet (UV) radiation.  How much actually passes through the heat resistant glass and its effect on our health is unknown.   It casts a harsh greenish light.  They are not compatible with dimmers and as I said before,  aren’t always compatible with your existing overhead light fixtures and fans.  You can’t toss them in the trash when they burn out and as of yet, there are limited recycling prospects.

It has also been reported that in normal usage, if you turn the CFL’s off and on as you would an incandescent bulb, you shorten the life of the bulb by 85%, but if you leave the bulb on for extended periods, it can overheat  and  if too close to something flammable, say good-bye to your “energy efficient” home.

Sure am glad Congress was looking out for the little guy when they passed that bill.