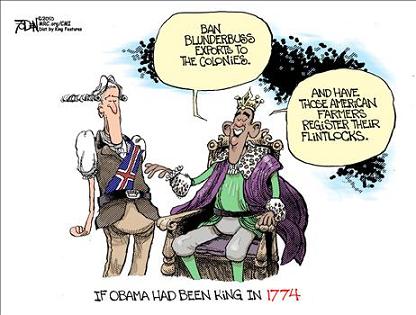 Originally published on The Ultsterman Report – some interesting information on Obama’s gun controll speech from a Republican Insider.

Like me you were probably watching the president’s gun control speech on Wednesday the 16th .  I was told this morning the presentation today was a revised version that was completed just last night after a bunch of back and forth between the White House and Senate leaders.  Guessing that would be Harry Reid mostly.

Last week the president was ready to go all in on the executive order scenario.  Confiscation was going to be in play.  Then the backlash came and it forced Obama to back off.  He didn’t want to but after Reid said it was a no go, and the NRA was preparing to go to war with the White House, the president was given a revised script and that is what we heard this morning.    You could tell too.  Obama stumbled over the words more than usual.  He didn’t have the time to prep the script like he normally does.  Probably fuming he was forced to read the new version also.

This time WE WON and OBAMA LOST.

If people want to know how to go at the administration, this is how you do it.  Be informed, and make your voices heard.  This is an example of how the new media I have been telling you about can work against the globalists.  It can be a huge weapon against them.  And a big thank you to the NRA.  It took on Obama and didn’t back off.

A big part of the plan coming from the White House was to cripple the NRA and make it a liability for 2014 and beyond.  That didn’t work and it will be a liability, but one that is going to hurt Democrats, not conservatives.  Big time backfire for the Obama White House.  I was told it “rocked them on their heels”.  They fundamentally don’t understand the American people and they didn’t see this backlash coming.  They have the media, and the glossy presentations, but they don’t really understand the American people and this debate was a pure example of that being played out.  I love it!

Congratulations to the state governments that were willing to voice opposition too.  They did that and took on a lot of risk.  Heard a list is being made and federal dollars might be taken away from them.  Those state leaders knew that could happen but took on the administration anyways.

That’s real leadership and courage being put on display for all of us and voters living in those states need to let those leaders know it is appreciated.  You know how I feel about how important the 10th Amendment is, and today was also a big victory for the 10th Amendment against the Obama White House.

Now from here it’s clear Obama wants to try and use the issue as leverage for the 2014 midterms.   They are hoping they can salvage something out of what became a fiasco for them.   I just don’t sense enough Democrats willing to play along on this one though.  Apparently the NRA and some other groups were lining up primary challengers to Democrats who went along with the president’s gun control plans and letting those Democrats know it was coming.  That scared the heck out of them.

Barack Obama is entering his lame duck phase, and the Democrats know it.  After 2014 he becomes a museum piece.  The president knows that too and it’s really ticking him off.  We have to rub that in his face 24/7 while also building the conservative base back up into the kind of powerful entity it should be.

When people get involved, and make some noise, they still have the power.  Use the new media, contact the lawmakers both state and federal, and talk to the people around you.  That is power.  That is what makes America so great.

The president had his little moment, and was pretending it meant something, but he said nothing.  That 21 (23) point plan or whatever it was, was hollow.  It was a gutted version of what he was hoping to do as recently as a few days ago.  Instead, he had to roll over and made a weak threat to Congress but that threat starts in the Senate and they already told him to shut up.  Obama backed off.  He lost this time, and it was all because of the American people.  His media will try to spin it as something different, and if he gets another chance, the president will be right back to pushing for confiscation, but for now, we won this particular fight.

This victory is a lot bigger than you’ll hear in the regular media.  It’s a lot bigger than anyone who stood their ground will ever know about.  The Obama White House was trying to go very big on this gun control thing, and couldn’t pull it off.  And Barack Obama is livid about it.  Like a spoiled brat he can’t believe he had to scrap the original speech.

It was a great day for the good guys.  Of course, there’s always another fight just around the corner, so we have to be ready.