Does This Toon by Jake Fuller Ring Any Bells? 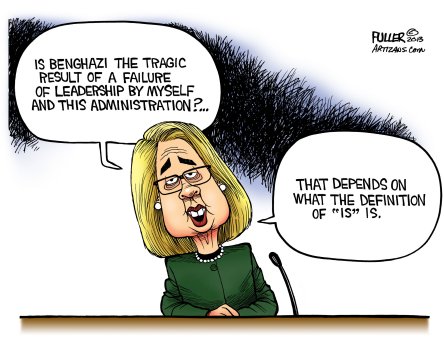 CLINTON: I stood next to President Obama as the Marines carried those flag-draped caskets off the plane at Andrews. I put my arms around the mothers and fathers, the sisters and brothers, the sons and daughters, and the wives left alone to raise their children.”

Her tone took a turn, however, during questioning by Senator Ron Johnson (R-Wi). Sen. Johnson insisted that Americans were “misled” about what occurred leading up to the storming of the U.S. embassy in Benghazi. After a heated back and forth, Clinton lost her cool shouting:

CLINTON: With all respect, the fact is we have four dead Americans was it because of a protest or was it because of guys out for a walk one night who decided they’d go kill some Americans. What difference at this point does it make? It is our job to figure out what happened and do everything we can to prevent it from ever happening again, senator.

Senator Rand Paul (R-KY) also had sharp criticism for the Secretary of State, blasting her handling of the situation:

The difference is had it been your daughter, you would have done something, anything to protect her. Senator Paul is right. You should be  relieved of your post and never allowed to hold any political office…..ever again!

← We Are Borg – Resistance Is Futile
Expedient Lies →