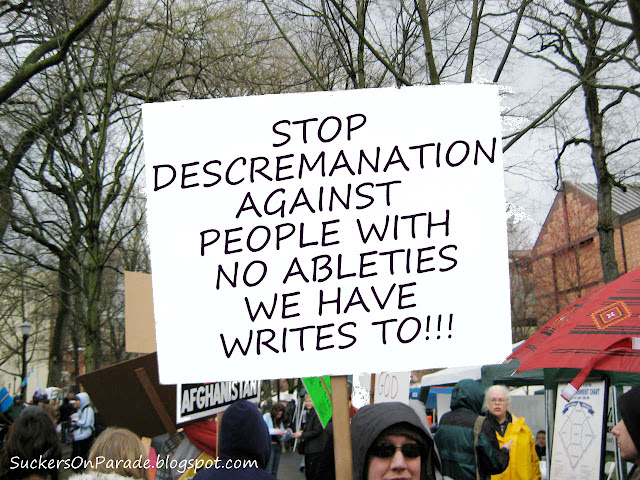 Free Republic – President Barack Obama and the Senate are considering sweeping legislation that will provide new benefits for many Americans. The Americans With No Abilities Act is being hailed as a major legislative goal by advocates of the millions of Americans who lack any real skills or ambition.

“Roughly 50 percent of Americans do not possess the competence and drive necessary to carve out a meaningful role for themselves in society,” said California Sen. Barbara Boxer. “We can no longer stand by and allow People of Inability (POI) to be ridiculed and passed over. With this legislation, employers will no longer be able to grant special favors to a small group of workers, simply because they have some idea of what they are doing.”

In a Capitol Hill press conference, former House Speaker Nancy Pelosi and Senate Majority Leader Harry Reid pointed to the success of the U.S. Postal Service, which has a long-standing policy of providing opportunity without regard to performance. Approximately 74 percent of postal employees lack any job skills, making this agency the single largest U.S. employer of Persons With No Ability. The Transportation Security Agency was a close runner up. Under the act, it will be perfectly acceptable to be in second place.

Private-sector industries with good records of non-discrimination against the inept include retail sales (72 percent), the airline industry (68 percent), and home-improvement warehouse stores (65 percent). At the state government level, the Department of Motor Vehicles also has an excellent record of hiring Persons with No Ability (63 percent).

Under the Americans With No Abilities Act, more than 25 million mid-level positions will be created, with important-sounding titles but little real responsibility, thus providing an illusory sense of purpose and performance.

Mandatory non-performance-based raises and promotions will be given to guarantee upward mobility for even the most unremarkable employees. The legislation provides substantial tax breaks to corporations that promote a significant number of Persons of Inability (POI) into middle-management positions, and give a tax credit to small and medium-sized businesses that agree to hire one clueless worker for every two talented hires.

Finally, the Americans With No Abilities Act contains tough new measures to make it more difficult to discriminate against the nonabled, banning, for example, discriminatory interview questions such as, “Do you have any skills or experience that relate to this job?”

“As a nonabled person, I can’t be expected to keep up with people who have something going for them,” said Mary Lou Gertz, who lost her position as a lug-nut twister at the GM plant in Flint, Mich., due to her inability to remember righty tighty, lefty loosey. “This new law should be real good for people like me. I’ll finally have job security.” With the passage of this bill, Gertz and millions of other untalented citizens will finally see a light at the end of the tunnel.

Said Vice President Joe Biden: “As an ex-senator with no abilities, I believe the same privileges that elected officials enjoy ought to be extended to every American with no abilities. It is our duty as lawmakers to provide each and every American citizen, regardless of his or her inadequacy, with some sort of space to take up in this great nation and a good salary for doing so.”

← Killing the Unborn
Conscience Void – The Culture of Death →