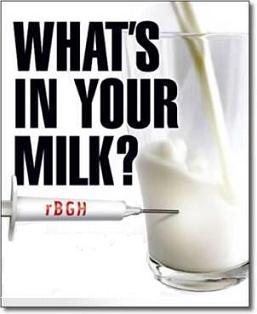 In 2009, two trade groups, the National Milk Producers Federation and International Dairy Foods Association,  filed a petition with the Food and Drug Administration to allow the use of aspartame—the artificial sweetener used in products like Diet Coke —in your child’s milk.   If this is such a great idea,  why don’t they want the FDA to require them to label the milk as sweetened with aspartame?

Milk consumption has declined and since kids seem to prefer chocolate milk which is higher in calories, which thanks to meddlesome Mama Michelle is not allowed in most schools, the NMPF and the INDFA want to substitute aspertame for sugar in the manufacture of flavored milk and pawn it off on your kids during school lunch.   “Part of the petition’s intent is really to encourage children and adolescents to drink milk,” says Peggy Armstrong, vice president of communications at IDFA. “We want to create lifelong habits.”

Unfortunately those life long habits of consuming aspertame may well insure they don’t have a long healthy life.

Aspartame is primarily made up of aspartic acid and phenylalanine.  The phenylalanine has been synthetically modified to carry a methyl group, which provides the majority of the sweetness. That phenylalanine methyl bond, called a methyl ester, is very weak, which allows the methyl group on the phenylalanine to easily break off and form methanol.  This is in sharp contrast to naturally-occurring methanol found in certain fruits and vegetables, where it is firmly bonded to pectin, allowing the methanol to be safely passed through your digestive tract.

Methanol acts as a Trojan horse.  Methanol, known as wood alcohol,  is found in antifreeze and rocket fuel, among other applications.  In humans, the methanol’s effect on the body is similar in some ways to that of ethanol, found in beer and wine.  But, unlike ethanol, the body deals with methanol by transforming it into waste products that include formaldehyde, a carcinogen that morticians use as embalming fluid, and since there is no catalase present, the formaldehyde is free to cause enormous damage in your tissues.

A National Institute of Health and National Cancer Institute funded study at Brigham and Women’s Hospital, a Harvard teaching facility, spanning 22 years,  found a clear association between aspartame and some cancers.   Health statistics for nearly 48,000 men and over 77,000 women over the age of 20 were reviewed for the featured study. They found that men who consumed more than one diet soda per day had an increased risk of developing multiple myeloma and non-Hodgkin’s lymphoma.   Interestingly enough, this association was not found in women.  Leukemia was associated with diet soda intake in both sexes.

As for the claim that aspartame will help in Michelle’s war on childhood obesity –   turns out the use of artificial sweetners actually stimulates your appetite, increases carbohydrate cravings, as well as stimulating  fat storage and weight gain.

A study  published in the January 2013 issue of the journal Appetite, by a Brazilian research team with the Faculty of Medicine of the Federal University do Rio Grande do Sul, found that  “greater weight gain was promoted by the use of saccharin or aspartame, compared with sucrose, and this weight gain was unrelated to caloric intake. Another  scientific study in 2010, published in the Yale Journal of Biology and Medicine (YJBM) discussed the neurobiology of sweet cravings and the unexpected effect of artificial sweeteners on appetite control, citing  several large scale prospective cohort studies that found positive correlations between artificial sweetener use and weight gain, which flies in the face of “conventional wisdom” to cut calories in order to lose weight.

Another reason for aspartame’s potential to cause weight gain is because phenylalanine and aspartic acid – the two amino acids that make up 90 percent of aspartame — are known to rapidly stimulate the release of insulin and leptin;  two hormones that are intricately involved with satiety and fat storage. Insulin and leptin are also the primary hormones that regulate your metabolism.

With all these reported side effects shouldn’t the FDA restrict its use?   Fat chance of that every happening.

Aspartame like Neutra Sweet is manufactured by Monsanto, that health conscious, consumer friendly  chemical company that brought us products like Agent Orange,  Roundup, Genetically modified wheat, alfalfa, soybeans, corn and soon to be salmon on steroids.  Oh and it doesn’t hurt that most of the FDA employees were at one time (and may still be on) Monsanto’s payroll!

If you want to fight childhood obesity do it the natural way – take away the IPads, Laptops, and gaming systems – make them go out and play, ride their bikes,  do chores, or  join organized sports and force the schools to  eliminate one hour of brainwashing a day so that the kids can hit the school gym.   Feed your children healthy well balanced meals and buy organic dairy products to make sure animals weren’t given Monsanto’s recombinant bovine growth hormone.

← Israeli-Palestinian peace is achievable
I Am Not A Dictator →