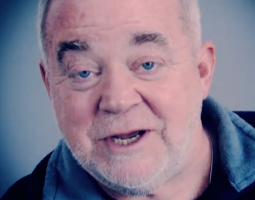 If you had read Wallis’ praise of the new series on the Bible, which I might add was not based on any Bible I’ve ever read, you would have to agree with North’s appraisal.

Wallis, heavily involved in the anti-Vietnam war movement, attended Trinity Evangelical Divinity School in Illinois where he  founded an anti-capitalist magazine he called the “Post-American” championing  the cause of communism,  wealth redistribution and government-managed economies as the key to achieving “social justice.”  During his time at the  seminary, Wallis railed against American foreign policy and joined the radical Students for a Democratic Society  as an organizer.   During the 70s the magazine’s name was changed to “Sojourners” and Wallis and his cohorts moved from Chicago to Washington, D.C.

In 1995 Wallis founded “Call to Renewal” a coalition of so-called religious groups united to the purpose of distorting the Bible to fit the leftist economic agenda of high taxes and wealth redistribution to  promote social justice.  Wallis, a registered Democrat, is  a slick operative, attempting to publicly protray himself as a politically neutral religious figure whose allegiance is to God while working with other lefties to undermine Christianity and our Republic.

Wallis’ 2005 book ‘God’s Politics’ was written to the progressive religious community.   In the book Wallis  attempted to spin his socialist agenda into a religious agenda by claiming the Hebrew prophets and Jesus  were teaching politics as well as religion.

In his 2008 book, Wallis envisioned a new “Great Awakening” in which America’s religious believers, especially its evangelicals, abandon their conservative beliefs in favor of his own proposed pathways to a secular utopia.   Great Awakenings of the past fueled support for abolitionism, child labor laws, and women’s suffrage, he observes. Now he wants his awakening likewise to mobilize religious support for causes of the left that he believes are the moral equivalent of fighting slavery and guaranteeing civil rights.

Still editor of Sojourners, a publication whose name is an allusion to biblical pilgrims, the name  signifies, to the ministry’s members, a duty to be
“fully present in the world but committed to a different order.”     As one of its first acts, Wallis, under the name of Sojourners,  formed a commune in the Washington, DC  neighborhood of Southern Columbia Heights. Members share their finances,  participate in various activist campaigns and organize events at local and national levels, the theme of which  centers on attacking U.S. foreign policy, denouncing American “imperialism,” and extrolling Marxist revolutionary movements in the Third World.

In the 1980s  Sojourners  actively embraced liberation theology,  rallying  to the cause of Communist regimes in Latin America, especially the Sandinista regime that took power in Nicaragua in 1979.  Writing in the November 1983 issue of Sojourners, ministry leaders Jim Wallis and Jim Rice drafted what would become the charter of leftist activists  committed to the proliferation of Communist revolutions in Central America.   Titled “Promise of Resistance,” they called on activists to carry out various acts of civil disobedience to obstruct any attempt by the U.S. to invade Nicaragua.    CISPES, the propaganda arm of El Salvador’s Marxist guerrilla movement, was invited by Sojourners to participate in acts of resistance in the event of American military intervention.

Steadfast advocates of the nuclear freeze movement, Sojourners in the 1980s maintained that a U.S. nuclear buildup was “an intolerable evil” at odds with Christian teaching,  while downplaying  any  Soviet threat.  At the end of the Cold War, Sojourners turned its attention to the United Nation’s climate change and environmental issues.  In one article in 1990, Bob Hulteen suggested that environmental activism was a logical outlet for the notions of justice.  Also during the 90s Sojourners went after Republican efforts to reform the welfare system as “mean spirited” characterized by “hatred toward the poor.”

Sojourners magazine contains a feature called “Preaching the  Word,” through which s0-called religious leaders who share the ministry’s socialist commitment to interpreting the scripture, can receive news articles coupled with biblical (?) commentary to supplement their leftist sermons.

Along with other leftist views, Wallis is against capital punishment, the free market and Israel while supporting open borders,  lots of taxes,  and spending on social programs.

Wallis, who is  Obama’s spiritual advisor and consultant on policy decisions, has taken Sojourners to memberships in  Nonviolent Peaceforce, Win Without War, and United for Peace and Justice anti-war coalitions.  They condemned Guantanamo Bay  as not only “a symbol of the U.S. government’s hypocrisy and dishonesty,”  but “one of the more egregious examples of the cost of unaccountable power” —  as manifested in “the abuse of prisoners” and in such transgressions as the  “desecration of the Quran.”

Marxism/Socialism is nothing new just as what Wallis is promoting is nothing new.  Social reformers deceptively blur the lines between God and their social agenda.  In removing God from religion, they leave themselves free to affirm anyone’s beliefs and anyone’s god into an all-inclusive social justice revolution.

“Woe unto you, scribes and Pharisees, hypocrites! for ye are like unto whited sepulchres, which indeed appear beautiful outward, but are within full of dead men’s bones and of all uncleanness.  Even so ye also outwardly appear righteous unto men, but within ye are full of hypocrisy and iniquity.”  Matthew 23:27-28