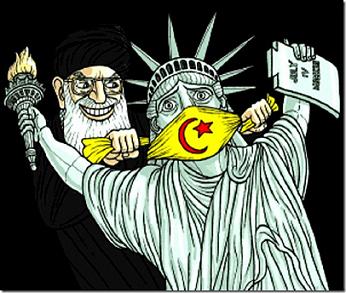 The Organization of Islamic Cooperation (OIC) has been actively trying to get the denigration of religions recognized as a criminal offense, according to a top official   “Next session of the Istanbul Process on Islamophobia will be held in the first half of this year, and the session will squarely focus on the issue of criminalizing denigration of religions,” said Rizwan Saeed Sheikh, director of cultural affairs at the OIC general secretariat and spokesman for the OIC secretary general.

“The OIC is of the firm view that any religion or its symbols should not be denigrated (unless you are Christian or Jew).   The Cairo Islamic Summit endorsed this position and tasked the OIC secretariat to develop a unified strategy to impress upon the international community to take effective measures against such acts of incitement of intolerance and hatred that may lead to violence and loss of lives,” he said while noting that Islamophobia figured high on the agenda of the summit.

So what has that to do with America?    “OIC Secretary-General Ekmeleddin Ihsanoglu launched the Istanbul Process, in July 2011, together with  Hillary Clinton and EU foreign policy chief Catherine Ashton, as well as with leaders of OIC and non-OIC member states, to build consensus on confronting Islamophobia.   After meetings in D.C. and London, the U.S., the UK, the African Union, the Arab League and the OIC  are moving to cement the process of quieting free speech regarding Islam through the United Nations, Article 20 of the International Covenant on Civil and Political Rights (ICCPR).

Unfortunately for the anti-free speech crowd, nations are not doing enough and even through Article 20 is binding on all countries that signed and ratified the article, it is not effectively transposed to the domestic laws of the respective countries, according to Muslims  so they are working to get it enforced  globally through the framework of the OIC-sponsored UN Human Rights Council Resolution, which is an outcome of the Istanbul Process.”

The U.N. Human Rights Council Resolution 16/18 was negotiated between the Obama Administration (Hillary Clinton) and Egypt (The Muslim Brotherhood), a prominent member of the Saudi-championed Organization of Islamic Cooperation (OIC).    It has been through numerous revisions since its inception to make it more palatable to Americans.  Previous versions of the Resolution, attempting  to criminalize blasphemous speech and the “defamation of religion,” were regularly rejected by the American delegation and by the US State Department, which insisted that limitations on speech – even speech deemed to be racist or blasphemous – were at odds with the Constitution.

Do you really believe that anything “at odds” with the U.S. Constitution would stop Obama or Hillary?    Changes to Res. 16/18 were  adopted to alter the language to the  “incitement to imminent violence” phrase – which “only” criminalizes speech that  incites violence against others on the basis of religion, race, or national origin.   Obama and Hillary approved of the changes  despite the fact that it (indirectly) places limitations  on speech considered “blasphemous.”  Which again, I might add, is still anti-U.S. Constitution.

Of course, the Socialist Obama Administration,  which has done everything but turn  the government over to the Muslim Brotherhood,  will work hand and glove with the Brotherhood to  decide what constitutes “incitement to imminent violence.”    If drawing a caricature of the Prophet incites violence by Islamic radicals  to the tune of riots, arson, and murder, all sanctioned by the IOC itself, then simply  drawing a cartoon or writing  a book, or article about Islam or Shariah law, or cracking a joke  about Islam would  become  a criminal act.

Even the OIC  had to acknowledge that the U.N. Resolution promoted by  Obama  has the same  aims as the Islamic bloc’s annual “religious defamation” resolutions.

While the United States would be silenced, the United Nations Resolution  would do nothing to prevent the continued use of anti-Jewish materials in Muslim schools, or the persecution of Jews and Christians in Muslim countries which, of course, just happens to be the same Muslim countries attempting to silence Americans.    At least now you know why Obama and Hillary loved it.   It is another tool to silence dissident of any kind.

Hillary, as Secretary of State, slapped her signature on the altered Resolution in 2011.   Elizabeth Kendal, an international religious liberty analyst and  advocate, in an article in the Washington Times in 2012,   said  resolution 16/18 was “far from being a breakthrough for free  speech … is actually more dangerous than” the religious defamation  resolutions.   Indeed, the strategic shift from defamation to incitement actually advances  the OIC’s primary goal: the criminalization of criticism of Islam,” Kendal  wrote.

The U.S. Constitutional protections for its citizens still takes precedent despite the OIC’s mandates.   “In Resolution 16/18, the OIC has deliberately and strategically adopted the  language of the International Covenant on Civil and Political Rights Article  20.2, which mandates: any advocacy of hatred that ‘constitutes incitement to  discrimination, hostility or violence shall be prohibited by law.  The ICCPR, which came into force in 1976, is legally binding on those  countries that have ratified it.   The United States ratified it in 1992, although with a declared reservation  that “article 20 does not authorize or require legislation or other action by  the United States that would restrict the right of free speech and association  protected by the Constitution and laws of the United States.”   I’m sure Obama is working to find away around the “reservation.”

Personally I would like to know where all that “targeting” of Muslims is happening.  It seems to me that the reverse is true.   Muslims are targeting Christians and Jews in Egypt, in Syria, in Africa, in Pakistan, in Afghanistan, etc.   Of course, you would definitely have to make a concerted effort to read about the persecution of non-Muslims in Muslim countries as  Obama and the lap dog media have imposed a “cone of silence”.

“The First Amendment, like other constitutional rights, is not an unfettered right.”   Philadelphia Democratic Mayor, D. Michael Nutter