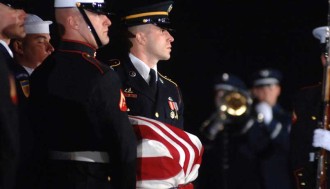 Bill McClellan, a liberal columnist at the St. Louis Post Dispatch has called for the end of military funeral honors.

According to the jack-ass (pardon my French), both the federal government and the state government are broke.  So why are we providing military funeral honors for all veterans? It is a nice gesture we can’t afford.

Certainly, men and women killed in combat deserve full military honors. It’s a way for the country to say, “We honor the memory of those who died in our service.” These military honors — and the thought behind them — are intended to provide some solace for the families of the fallen.   Bear in mind that most veterans did nothing heroic.  They served, and that’s laudable, but it hardly seems necessary to provide them all with military honors after they have died.   In fact, it seems generous enough to provide veterans and their spouses with free space and headstones at a national cemetery.”

Typical liberal, can’t see the forest for the trees.   How about cutting costs by not  funding research on the sex lives of fruit flies, or snails!  How about stopping Congress from buying  elections with pork!   No, for a liberal these are important waste of taxpayer funds.   But the death of a service member?

I come from a long line of warriors who fought in the  Revolutionary War,  the War of 1812, the Civil War (both sides),  the Mexican-American War,  WWI, WWII, Korea, Vietnam,  Dessert Storm, etc.   Service to ones country is an honor and a privilege.

We ask our young men and women to fight, not only for our country, but for  foreign countries under the banner of the United Nations. They  are underpaid and at times under appreciated,  have had to face hostility from the left for their service and  usually have to fight the federal government to receive the benefits and medical care they were promised.

You can’t put a price on being asked to give your life for your country.   The rendering of military funeral honors is a way to show the nation’s  gratitude to those who, in times of war and peace, have faithfully defended our country.   This ceremonial paying of respect is the least a  nation can provide to the veterans’ families.

A military funeral  is impressive, touching to witness and much more than providing solace to the families.  The precision and formality of the service is a tribute to the deceased service member or veteran.

I encourage you to share your thoughts with Mr. McCllellan at   bmcclellan@post-dispatch.com