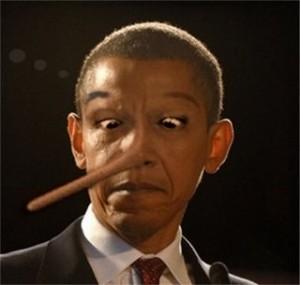 The UK Daily Mail  sums up   Obama’s long-delayed 2014 budget proposal   as a mixture of “bad math, phantom revenues, imagined spending cuts, and a middle-class tax hike.”   The White House is really phoning this one in.  They’re recycling the knee-slapper about how the new spending plans of the man who already added 60 trillion dimes to the national debt are “fully paid for, so they do not add a single dime to the deficit.”

Obama promises  $1.8 trillion in deficit reduction dependent upon cost savings from ObamaCare, although similar previous claims have been debunked.  He wants to implement the Chained Consumer Price Index to cut benefits for the elderly, disabled, and poor families and he is promising that  “every new initiative in the plan is fully paid  for, so they do not add a single dime to the deficit.”

Along with those waders, you might need a shovel or two.  Obama is also bragging that he has  already squeezed $2.5 trillion out of  the government’s next ten deficit statements, by signing bills into law that contained “a total of about $2.5 trillion in deficit reduction over the past two years.”  Unfortunately for him,   FactCheck.org, a program of the University of Pennsylvania’s  Annenberg Policy Center,  reported in February that Obama’s total sum included  about $600 billion, however, in new taxes – not spending reductions.   It also  included $500 billion in reductions of the amount the federal government planned  to pay in future interest on its debts.  Only about $1.4 trillion consisted of actual  spending cuts – or at least what Washington wonks call spending cuts.

Beneath all the smoke and mirrors, Obama’s new budget proposal could at least be described as a bit more  restrained than the ludicrous fantasies he usually tosses at Congress between his star-studded White House parties and vacations.   An extremely charitable reading of the new budget might conclude that it only raises spending a little.

”So where are the net spending cuts?” House Speaker John Boehner’s press secretary, Brendan Buck, snorted.  ”I guess they don’t exist.  The President’s budget will – at best – be flat on spending, or potentially even be a net spending increase.  Any deficit reduction will come exclusively from tax hikes.”

Only in the distorted, delusional, socialist minds of  D.C. could tax increases be seen as spending cuts!