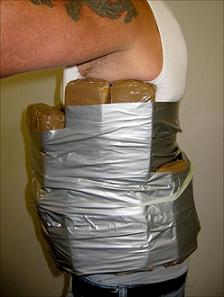 “Bringing illicit drugs into a Muslim nation like Saudi Arabia, Iran, or Egypt will get you executed. Bring them into the US and we will read you your rights in the language of your choice, provide you with a lawyer, a trial, three hots and a cot and a ride back home if your home country will take you. If not, welcome to America, have a green card, the food stamp office is located at your consulate, and voter registration is no longer required.” John DeMayo, Last Resistance

If an American corporation were responsible for bringing a product to market that fueled the deaths and economic carnage occurring across our nation, liberal politicians and left-wing social activists would be calling for their scalps.

Responsible parties would feel the full power and force of the Executive Branch. Joe Biden, would be beating the Congressional bushes for support for new legislation designed to save children’s lives and make American communities safer from evil industrialists.

So why are the Mexican government, drug cartels and drug gangs given a Obama exemption?  Are the millions of dollars in campaign contributions worth more than the life of one child, Mr. President?  What happened to “if we can just save one life?”

Obama’s failure to secure the US/Mexico border and curb the flow of illicit drugs into American communities kills more Americans in one month than all mass school or public shootings have in the last 50 years. So where is the liberal moral outrage and calls for increasing border security and cracking down on Mexican drug cartels and street gangs? 90% of the illicit drugs sold, purchased, and consumed are brought across the US/Mexican border.

There are far too many American lives sacrificed to careless and questionable Department of Homeland Security Border Protection strategies while our Congress is discussing immigration reform instead of the drug war raging on American soil.

Several days ago worthless gun control legislation was defeated in the Senate and Obama called it a “shameful day for Washington.

I will give you shameful.  Every year that Obama has held office, Mexican drug cartel cross border illicit drug trafficking has increased and so has its associated drug deaths and human carnage. The US/Canadian border, a place that most Americans falsely assume is secure, has also seen increases in the volume of designer drugs flowing to America.

Compared to other causes of preventable deaths, drug-induced causes exceeded the 31,224 deaths from injuries due to firearms. Note that 2/3’s of all firearms deaths are suicides.

Approximately 2.1 million children live with a parent who is dependent on or abuses illicit drugs.

The economic cost of drug abuse in the U.S. was estimated at $180.0 billion in 2002, the last available estimate.

That is truly shameful!

“Did you know America ranks the lowest in education but the highest in drug use?  It’s nice to be number one, but we can fix that.  All we need to do is start the war on education.  If it is anywhere near as successful as our war on drugs, in no time we’ll all be hooked on phonics.”  Leighann Lord

← Who to Believe?
Exploiting Fear to Take Our Liberty →