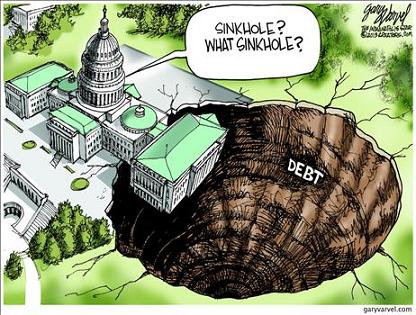 “It’s big government that turns citizens into supplicants, capitalists into cronies and cooperative communities into competing special interest.  Freedom, by contrast, unites us.  It pulls us together and aligns our interest.  It draws us upward, toward the best version of ourselves.  The free market and civil society are not things more Americans need protection from.  They’re things more Americans need access to.”  David Muhlhausen

Christopher DeMuth , Esquire,  a distinguished fellow at the Hudson Institute gave a keynote address at the Transatlantic Law Forum in February, Executive Government and Bankrupt Government.  You can read the address in full at the link provided in pdf format.

As Congress became more porous and responsive to outside pressures from lobbyists and special interests, it quickly ran up against the practical limits of legislative action. Their solution in the 1970s was delegation of lawmaking to specialized agencies that had fewer internal conflicts.  Congress established numerous new agencies such as the EPA that exercises essentially legislative power over broad swaths of the economy.  These agencies bypass legislative power and make law through rules and regulations, decided by an unelected bureaucrat rather than through the previous practice of voting by a bipartisan commission.  Measured by the number and length of rules and their economic effect, federal regulation expanded rapidly.

Congress reorganized itself in ways that weakened the power of the old-bull committee chairmen as gatekeepers of taxing and appropriations, resulting in a free-for-all, allowing the ambitions of the executive branch to override their legislative power.  Federal deficits, measured as shares of federal spending and of GDP, doubled in the 1970s from what they had been in the 1960s, and continued to grow exponentially in subsequent decades.

The executive branch was well prepared for the new assignment. The  Bush administration and Federal Reserve Board merged policymaking, appropriating hundreds of billions of dollars without congressional involvement, and stretched statutory authorities as they saw fit. Congress’ response to these usurpations, in the Dodd-Frank Act, was to codify and extend the autonomous powers of the executive branch and the Fed beyond anything seen before. Procedures for congressional budgeting were effectively suspended. Annual deficits more than tripled.

The executive branch, under Obama’s leadership, has grabbed even more power through the expansion of agencies to regulate,  and through the use of executive orders to by-pass Congressional power to legislate.

With government debt on a collision course with reality, both political parties are committed to continuing deficit spending at levels that would have been considered obscene a few decades ago.

The unbounded chief of the executive branch (Obama) has proven to be an instrument of unbounded debt.  While legislators add relatively small pork barrel items to spending bills in the dark of the night, presidents are the dynamos for exertions with gargantuan price tags – wars, foreign interventions, new and expanded entitlement programs, stimulus packages, financial bailouts, green energy programs, etc.

The collapse of fiscal discipline in  Congress has opened the door to greater spending and  executive supremacy  over cosmic spending and borrowing.  The fusion of executive politics and central banking has made it even easier to undertake expansive new projects and programs.

The composition of direct federal spending has shifted from production to consumption, i.e. money and in-kind payments to individuals for health care, retirement income, unemployment support, food and housing, etc.  While, from the standpoint of budget discipline, spending is limited by available opportunities for production, spending on consumption is open-ended.

Consumption is subjective and elastic, and the possibilities for increasing the kind, level, quality and availability of benefits are practically unlimited.  That is the ultimate source of today’s debt predicament.  More borrowing for more consumption has no natural stopping point  – short of implosion.

DeMuth suggests that there should be an increase in legal control over executive power.  The executive branch has many non-statutory, administrative means of taxing and punishing that are now beyond the formal powers of Congress. Presidents, elected by the whole of our immense nation, see policy in national or global terms and are prone to excessive abstraction.  They want to change the course of the climate, bestow democracy on foreign lands, make good things universal and bad things extinct.

“We want a president who can speak for the nation and act forcefully in emergencies.  But, we should not want, what we have acquired inadvertently, an executive branch that is able to govern unilaterally over a wide range of matters.”