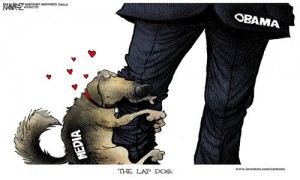 Has it finally happened – has the lap-dog media begin to yank their head out of the sand?

In an article in the New York Times, written, no less by the Editorial Board, they gave the Obama administration a scathing review.  “Obama administration officials often talk about the balance between protecting secrets and protecting the constitutional rights of a free press. Accusing a reporter of being a “co-conspirator,” on top of other zealous and secretive investigations, shows a heavy tilt toward secrecy and insufficient concern about a free press.”

Well, that is as scathing as the far left is ever going to get.  In order to wake up and do their job, they’d have to admit that their politics tilt so far left they are totally off the scale.

The drive-by media have deliberately acted to conceal any newsworthy information it obtains about the actions of the US government.  In each instance, these journalists, and I use that term loosely, have concealed facts from the people at the behest of the Obama Administration, under a false claim of national security.  In each instance, what this media concealment actually accomplishes is enabling the dissemination of significant government falsehoods without challenge, and permitting the continuation of government deceit and even illegality.

As far as I’m concerned, these so-called “journalist” are just as guilty as the Obama administration.

The only question now is what will happen next. Will the media redouble their efforts to win Obama’s affection? Or will the media begin to earn Obama’s respect, at the expense of his affection,  by finally doing their jobs — and not just by complaining about these leak investigations, but by demanding and reporting on the full and complete truth behind the Libya and IRS scandals.

When the government has no dissenting voices challenging its excesses, its power grows unchecked.  This centralized power exalts bad men into tyrants.

“Tyrants have always some slight shade of virtue; they support the laws before destroying them.”  Voltaire

← Avoid Communism, Stay our of New Jersey
Obama: Making The Case For Conservatism →