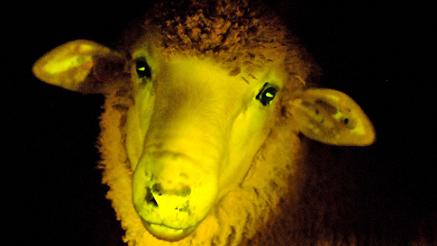 “To tamper is defined as “to interfere unwarrantably or damagingly, to meddle…to have secret or corrupt dealings.” Is anyone really in favour of that? Scientists should investigate, use and work with nature, even adapt it to suit human purposes and to solve human problems. But should they tamper with it? Surely the answer to that question has to be no.”

Uruguay’s Institute of Animal Reproduction has unveiled the world’s first glow-in-the-dark sheep, attained by genetically modifying the sheep with a gene from a jellyfish, which created a green fluorescent protein, thus allowing the sheep to glow.  You can watch the video at this link.

According to the researchers, the 9 sheep, which were born in October of 2012,  developed normally, and showed no behavioral or physical changes – besides glowing in the dark.

Sheep are not the first animals to be modified to glow in the dark – there are glow in the dark cats, dogs, pigs, scorpions, worms, monkeys, mice, zebrafish, etc. all developed, so they say, for scientific research into disease.

Every time we embark on some grand new science fad,  would it not be wise to proceed with caution? Anything that can go wrong, will go wrong –  sooner or later.

While it may not glow in the dark, New Zealand scientists developed a genetically modified cow that they say will produce milk less likely to cause allergic reactions because it produces milk without beta-lactoglobulin, a whey protein to which some people are allergic.

The genetically modified cow was born without a tail and doesn’t even produce milk with being pumped full of hormones but, according to the scientists, it has nothing to do with tampering with mother nature.

“I do have concerns about some of the technologies that those with ulterior motives try and foist upon us. And so do most people, which is why the technologies get demonised in the mass media. Nuclear power becomes a series of radiation scares, GM becomes frankenfoods and nanotechnology becomes “grey goo”. The temptation for scientists involved in these fields is to shoot the messenger, and ignore the message. This is a mistake.” Rob Edwards

← She Is Still A Race-Monger
Abuse of Power →