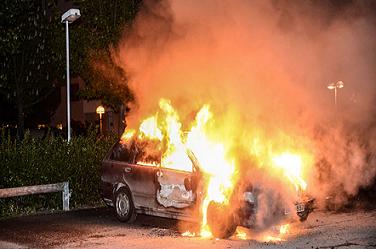 For years, Sweden – one of Europe’s most tranquil countries, famous for its attractive immigration policies and generous welfare system – has been accepting an influx of immigrants, which now make up about 15 per cent of its population.

In Sweden, a true Socialist country,  you’ve got welfare, access to the educational system – up to university level, you’ve got access to public transport, libraries, healthcare – to everything. “And still they feel that they [immigrants] need to riot through stones and Molotov cocktails. It’s ridiculous and a bad excuse,” Swedish Democrats MP Kent Ekeroth said.

According to journalist in Sweden, the problem isn’t with the government or the Swedish people.  In the last twenty years Sweden has seen so many immigrants come into the country that don’t like Sweden nor plan to integrate into society.  They come because they know that Sweden will give them money (welfare) for nothing.  “They don’t have to work, the don’t have to pay taxes, they can just stay here and get a lot of money. . .”

Gerolf Annemans, a party leader of a Belgian Nationalist party said that “they [Muslim youths] have always sought excuse to show that they are not agreeing with the basic values of Western society,”, pointing to the recent cases of the Boston Marathon bombing in the US and yesterday’s beheading of a British soldier in the UK.  “Young Muslims who enjoy tolerance, social institutions and welfare while living in Sweden nevertheless refuse to integrate into the West. It’s always the same problem. There is a massive refusal by Muslim youngsters of the basics of Western society…  and they take any excuse whatsoever to show that with violence – that is where the problem is.”

Sweden is finally coming to the realization that a massive welfare state and immigration do not always mix, a lesson that America will probably have to learn the hard way.

Language is the major bond that holds a nation together and distinguishes it from other nations.  America’s language is English yet there are some 300 different languages now spoken in this country.  Immigration communities in some states have become so large and insulated that immigrants  are finding no need to learn English.  When immigrants can have their own languages, customs and values, reinforced by large numbers of people like themselves, they don’t need to assimilate into our society and as a result, expect us to assimilate to them.

The rejection of the “melting pot” metaphor bred the new imperative to remain as separate, identifiable groups, a “salad bowl.” This notion was codified in federal law, both in the 1964 Civil Rights Act and the 1965 Voting Rights Act.

Generations of American students have been nurtured on the multiculturalist/ diversity concept, being taught the equality of all cultures and to expect all groups to achieve at equal rates and be proportionately represented in every institution of public life. This is a fallacy.   Multuralism/diversity, the underpinnings for racial preference legislation, have prevailed for decades. The notion of individual preference or choice is superseded by considerations of group identity.

According to the Center for Immigration Studies, 57% of all immigrant households  with children use at least one welfare program, compared to 39% for native  households with children.  Illegal immigrants are high users of food assistance  and Medicaid, but legal immigrants are consistently higher in the use of all welfare programs including those that illegals do not qualify for.   What this shows is that you cannot simultaneously have free immigration and a welfare  state.

Amnesty will ensure that illegals will become part of the welfare state, without ever being  screened as desirable, contributory, productive, or any of the things that  should make legal immigrants beneficial to the country.

A socialist welfare state removes the motivation to succeed, to assimilate, to become a productive participant in  society.  In the 19th century, the phrase was “root, hog or die”  – Raise crops, farm  animals or starve!  From the Jamestown colony to the 20th century, America was a  self-sufficient society in which all understood St. Paul’s epistle to the  Thessalonians –  “He who does not work, neither shall he eat.”

During Depression days and World War II up through the 1950s, the necessities  of life were provided by the individual or by the family.  Today,  government provides for almost all of the needs of those who  claim they cannot provide for themselves.

“Our country has strayed perilously far from the America our Founding Fathers envisioned, and in doing so, we are expediting our fall from greatness.  Where is the America that toppled the Soviet Union, put the first man on the moon, and conquered the great frontier?  That America is quickly becoming a distant memory.  Instead, we are striving to become a liberal Utopia, all the while ignoring that this sort of idealism precipitated the all-consuming debt and economic travails we see just across the Atlantic Ocean.”  KayLeigh McEnamy

← Obama administration of “Don’t Care”
Is The Liberal Veneer Starting To Crack? →