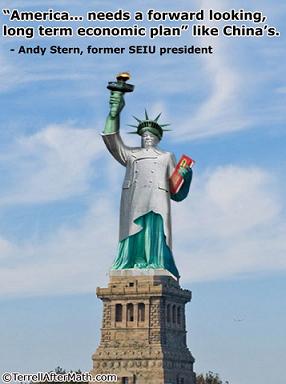 China has made trillions of dollars off the U.S.,  thanks in part to massive interest payments on the uncontrolled borrowing by the Obama administration, as well as from a huge and ever-increasing trade deficit.

During the Obama ‘presidency,’ China surpassed America as the world’s leading economic power. They have used this money to radically increase the size and sophistication of their military, to the point where it is very questionable whether we could do anything should they move to start taking over other Asian countries, like the Philippines, Japan, or South Korea.

Obama, as ‘commander-in-chief’ is responsible for all national security issues, including breaches.  Over the past couple of years, he  and his leftist  administration have allowed the Communist Chinese People’s Liberation Army (PLA) to hack into our military computer system and steal virtually all our military weapons designs.

What Obama got in return is not clear, since like everything else in his “most transparent administration ever,” his political donors have been largely kept secret. However, given the massive amounts of money Bill Clinton got from the Chinese, it is unlikely that the greedy pigs in the Obama campaign machine didn’t take even more.

Clinton’s quid pro quo included giving the Communist Chinese all sorts of help getting established in places like both ends of the Panama Canal and the Bahamas, selling them the technology to actually get their missiles to hit their targets, and enabling them to continue to steal all of our top-secret nuclear technology. By 2002, they had the capability to launch intercontinental ballistic missiles, armed with cutting edge atomic warheads, and hit what they were aimed at.

It appears that Obama’s quid pro quo is allowing them to set up Special Enterprise Zones across America, and giving them the information to make all our weapons systems totally vulnerable. Yet none dare call any of this treason.

According to Robert Williams, founder of the Wall Street Daily, in an unprecedented “on-the-sly”  agreement, the U.S. Treasury has agreed to give China direct access to its auctions.   China will now be allowed to bypass Wall Street and purchase Treasury Bills without placing any bids through primary dealers.

Never before – NOT IN THE ENTIRE 237 year history of this great country has any foreign government been granted such intimate access to Capitol Hill. While there are no laws being broken, the Treasury’s accommodation of China is definitely suspicious.  China already holds more than $1.2 trillion in U.S. Treasuries – before long, China will own 50 cents on every dollar of U.S. debt.

Add to this the recent robust moves by China to replace the dollar as the world’s reserve currency.  According to Dick Bove, vice president of equity research at Rafferty Capital Markets “if the dollar loses status as the world’s most reliable currency, the U.S. will lose the right to print money to pay its debt.  Rating agencies are already arguing that the government’s debt may be too highly rated.    Plus, the U.S. Congress, in both its houses,  as well as the president, are demonstrating a total lack of fiscal credibility.

It’s even predicted by some economists that the dollar may be dumped by 2015.  If that happens, with the shambles the economy is in due to Obama and his Marxist minions ramming socialism down our throats, America will implode and chaos will reign supreme.  Which is what China is aiming for, and where all this is leading.

For a number of years, China has its dream of world domination within its grasp.  Unfortunately, its economy has not grown fast enough due to its lack of energy to fuel the engines of growth. They have been competing for every drop of oil that’s out there, but it has not been enough.  This is where a collapsing U.S. comes into the equation.

Leftists in America, whether they call themselves communists like Obama’s mentors Frank Marshall Davis and Bill Ayers, or progressives like all the Marxists and neo-fascists who dominate the Democratic Party, have deluded themselves into believing that they can manipulate and dominate the Chinese.  Tragically – for America, it is obvious that the opposite is true.     You can read Michael Oberndorf’s article in full at this link.

← The Culture of Death
DHS Prepares For Civil War →