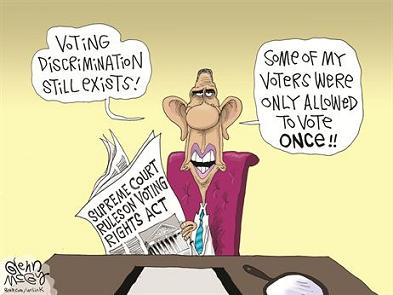 The Voting Rights Act of 1965 made it illegal to adopt laws or rules that denied the right to vote based on race. That law still stands.  What the Supreme Court stuck down was that portion of the law that forced states in the so-called “covered jurisdictions” to  obtain prior approval from the Justice Department or a federal court before changing their voting laws.

Chief Justice John Roberts reasoned  that America is not the country that it was a half century ago when the Voting Rights Act was passed to end a century of attempts by former slaveholding states to block blacks from voting.  “Our country has changed, and while any racial discrimination in voting is too much, Congress must ensure that the legislation it passes to remedy that problem speaks to current conditions.”

In essence what the Supreme Court said was that in order for the Voting Rights Act to interfere with state sovereignty, Congress has to identify where racial discrimination in voting access actually exists and where it is so endemic as to require that kind of intervention today – not 50 years ago.   It really wasn’t that hard of a decision.  Federal attorneys couldn’t make an argument that the  discrimination that required federal interference still exists – only that because it did once exist it probably still does.

The country has changed – liberals haven’t.

Holder is sure that problems of discrimination “have not been consigned to history. . .they corrode the foundations of our democracy.”   America is a Republic!  What Holder failed to mention is that most of the discrimination comes from the left – against Christians, Conservatives and Pro-Lifers and  Veterans.

Obama is “deeply disappointed. . .invalidating one of the Voting Rights Acts provisions upsets decades of well-established practices that help making sure voting is fair. . .”   Translation: voting is only fair when felons, illegal aliens and the dead are allowed to vote – maybe twice.

The liberal Lawyers Committee for Civil Rights is sure those evil Southerners “will be able to enact policies that prevent minorities from voting. . .”  Minorities include the dead, illegal aliens, and felons.

Sherrilyn Ifill, president of the NAACP Legal Defense Fund, called the decision “an act of extraordinary judicial overreach. The court has left millions of minority voters without the mechanism that has allowed them to stop voting discrimination before it occurs.”    Doesn’t it amaze you that the Supreme Court only over-reaches when they don’t boot-lick the liberal agenda?   Ifill also neglected to mention in her statement that minority candidates hold office at unprecedented levels all over America – even in the evil South.

Edward Blum, who coordinated the current challenge to Section 5 and a previous one in 2009, said the decision “restores an important constitutional order to our system of government which requires that all 50 states are entitled to equal dignity and sovereignty. Our nation’s laws must apply uniformly to each state and jurisdiction,” something progressives don’t want.

← Is Obama ‘Going for the Hypocrite of the Century Award?’
Cruz Speaks in Support of his Amendment to Defund Obamacare and Stop the Amnesty Tax →