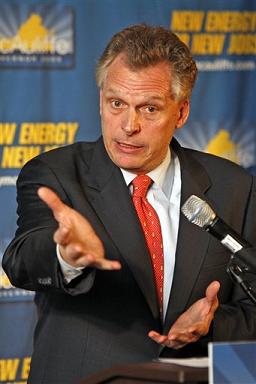 I don’t know about the rest of Virginians but I am totally fed up with the lies and half-truths put forth by  Obama wanna-be Terry McAuliffe in the Virginia governor’s race.

Terry McAuliffe and Anthony Rodham, brother of Hillary Clinton, are under investigation by the SCC for fraudulent business practices.  GreenTech has also become a focal point in an increasingly vitriolic dispute within the Department of Homeland Security, where several career employees have raised concerns about favoritism shown to the firm and about whether there has been sufficient scrutiny of foreign nationals whose investments in GreenTech have entitled them to special immigrant visas.

Despite his claim that he resigned from Green Tech, McAuliffe is “currently the largest individual shareholder.”  According to a Washington Post article, GreenTech fits into a pattern of investments in which McAuliffe has used government programs, political connections and access to wealthy investors of both parties in pursuit of big profits for himself, making him a millionaire many times over,  paving the way for a long list of business ventures, including his law firm, from which he resigned in the 1990s after profiting — along with his partners — from fees paid by domestic and foreign clients seeking results from the federal government.

One high-profile example involved Global Crossing,  a telecommunications firm whose demise in the 1990s cost investors billions of dollars.  McAuliffe sold some of his Global Crossing shares just 6 months before the stock price plummeted and made himself a cool  $8 million before the company went sour.

Now, while this might not bother anyone who has attached themselves to Obama’s brand of backroom Chicago politics, it does bother me.

McAuliffe’s campaign has been nothing but a series of lies and half-truths to turn Virginians against his opponent, Ken Cuccinelli.  The Virginia race has been a carbon copy of what Democrats did so successfully in
last year’s Senate and House races. The approach runs thus: A Democratic candidate, assisted by unions and outside partisan groups, floods the zone with attack ads, painting the GOP opponent as a tea-party nut who is too “extreme” for the state. The left focuses on divisive wedge issues—like abortion—that resonate with women or other important voting constituencies.  The drive-by media overlook the Democrat’s reliably liberal record, and the lies within the smears against his opponent, and ultimately declares the Democrat unbeatable.

We have already seen this strategy with the governor’s race.

McAuliffe has charged that Ken Cuccinelli sided with energy companies against the residents of Southwest Virginia:  McAuliffe’s lie stems from a lawsuit filed by Mississippi trial lawyers on behalf of property owners against several gas companies.  As part of their strategy, they were attempting to have the Virginia Gas and Oil Act declared unconstitutional.  This Act  created a legal framework for gas rights owners to receive royalties.   If the Virginia Gas and Oil Act had been declared unconstitutional, it would mean that all people across Southwest Virginia would have been deprived of their property rights.

For the record, Cuccinelli proposed a legislative solution in 2011 to solve the logjam of gas royalty payments but the gas companies and the Democrat Senator from the region opposed it.  If it had been adopted, over the objections of the gas companies, most of the gas royalties that are still stuck in escrow would have been paid out by now.

McAuliffe also claims that  Cuccinelli opposed the Violence Against Women Act because the Attorney General’s office didn’t sign on to a letter lobbying for the bill.  It has always been standard practice for the Attorney General’s office not to sign any of these types of letters and to suggest that Cuccinelli is anti-women is ridiculous.  Under Cuccinelli, the  Attorney General’s office has worked to fight against human trafficking to protect women from entering into forced sexual servitude.  Virginia was recently recognized by the Polaris Project, a national victims’ advocacy group, for being on the most improved states in fighting human trafficking.  The AG’s office also oversees numerous domestic violence prevention and response programs to keep women safe and help them recover when the worst happens.

Not letting something as simple as the truth stand in his way, McAuliffe continues his lies that Ken is  “insensitive to women”  –  that Cuccinelli would prevent women from getting a divorce, along with limiting  access to abortion and birth control.

McAuliffe falsely claims Cuccinelli wants to ban various form of sex between consenting adults and is working hard to turn attempts to protect children into a social issue fight.  The case McAuliffe points to is MacDonald vs. Moose.  William Scott McDonald was 47 years old when he was convicted of soliciting oral sex from a minor girl. McDonald was prosecuted using Virginia’s anti-sodomy law, which is only applied to sex offenses attempted or committed against minors, against non-consenting adults, or in public.  This, by the way, was not McDonald’s first offense.  In fact, contrary to misinformation peddled by Terry McAuliffe and his liberal allies, the law is not – and can not – be used against consenting adults acting in private.

McAuliffe is also claiming that Cuccinelli sued former University of Virginia Professor Michael Mann because he  disagreed with Mann’s position on global warming.  The truth – Cuccinelli never sued Mann.  When the infamous “Climategate” e-mails became public, demonstrating unprecedented deceit and bullying by academics – including Michael Mann – questions were raised regarding whether misstatements were made in an effort to win government funding.  The Attorney General’s office only sought to review documents held by the University of Virginia to review whether any false statements had been made in an effort to obtain taxpayer funding.  The matter was not a disagreement over science, but was simply Cuccinelli seeking to protect taxpayers.

McAuliffe and his liberal allies, including Mayor Bloomberg,  have spent huge amounts of money distorting the facts regarding Jonnie Williams and Ken’s handling of gifts, while ignoring Terry McAuliffe’s long list of ethical lapses and exploitative business deals.  The Commonwealth’s Attorney concluded that no laws were broken.

McAuliffe’s campaign has been financed mainly by out-of-state billionaires and labor unions, eager to put Virginia into big government’s pocket.

Before you vote in November, consider the consequences of your choice.

← Who Does He Think He Is Fooling?
Taking A Stand Against Discrimination →