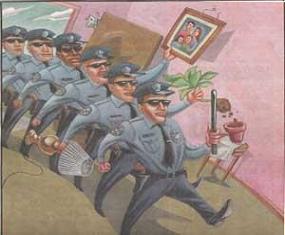 Civil Asset Forfeiture  (CAF) laws were created to allow  law enforcement to go after the illegal gains of big time criminals  —  but today,  civil asset forfeiture has morphed into an ATM machine for some police agencies.

CAF is based on the premise that a piece of property  —  your car, your home, your boat, your vacation property, your jewelry, your cash  — can be guilty of a crime, allowing police departments to seize the property if they can show any connection between the property and illegal activity.   The owner doesn’t have to be charged or convicted of a crime in order for the police to seize the property.  It is then the owners responsibility,  at their own expense, to  prove to the court that they own the seized property and/or earned it legally.

There is a large cash incentive for police departments to find these “illegal properties”  as they  can seize the property,  sell it, and pocket a a large percentage of whatever funds they receive after giving the federal government their cut.

CAF laws represent one of the most serious assaults on private property rights in the U.S.

Virginia’s forfeiture laws are scattered throughout many sections of the statutes making the law confusing.   According to a National Justice Institute report in 2010, “Policing For Profit: The Abuse of Civil Asset Forfeiture, Virginia ranked as one of the worst states for abuses, earning a grade of D-.

Under Virginia’s civil forfeiture law, the state must prove only, by a preponderance of the evidence, that property is related to a crime to be subject to forfeiture.   90% of the receipts of forfeiture go directly to local law enforcement agencies that participated in the forfeiture and 10% goes to the Department of Criminal Justice Services to be used to promote law enforcement activities.  Virginia’s law has enabled the Commonwealth to receive, on average, more than $7.2 million a year between 1996 and 2007.

A current civil asset forfeiture case in Massachusettes is a perfect example of feds  and local police run-a-muk.  The Caswells own a motel, free of any liens, that is worth around one million dollars.  The feds has decided that this property is “guilty of a crime” because over the course of 20 years a handful of drug crimes have taken place.  The Caswells have never been accused, arrested or convicted of any crime, but because the crimes were committed on property they own (worth a million dollars) the feds want to take it.

A Philadelphia couple are facing the loss of their home because their son was arrested for selling $40 worth of drugs, not inside their home but outside of their home.  In Philadelphia alone, authorities have seized more than $64 million in assets over a ten year period.  Twenty-five million went directly to salaries.  Police officers in Hunt County, Texas have received bonuses topping $26,000 a year due to asset forfeiture.

Virginia state police are allowed to keep 80% of the $28,000 confiscated from the car of a church secretary whose only sin was that he was transporting the cash to buy property for the church.  In Houston, Texas, one couple was threatened with jail and the removal of their children if they didn’t turn over the cash they had on them to buy a new car  to the local D.A.

In Humboldt County, Nevada a driver lost $50,000 in winnings from a local casino for refusing to allow a deputy to search his car when he was pulled over for going 3 miles over the speed limit. The deputy claimed to have smelled marijuana, and while no drugs were found during his illegal search, he seized the drivers winnings.

Civil forfeiture is a legal fiction that allows law enforcement to charge property with a crime in order to enrich their own coffers.