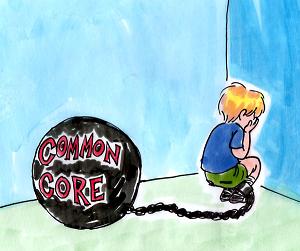 Common Core [CC], in a nut shell, is nationalized education – a federal, top-down approach based on Collectivism rather than individual achievement, sold as a set of rigorous internationally benchmarked standards to bring uniformity to education. Knowledge, understanding, critical thinking, and comprehension under Common Core standards give way to socialist global values, beliefs, feelings and behaviors. After all comrade, one of the requirements of a good ‘global citizenship’ is, of course, the concept of ‘shared responsibility’ and ‘shared sacrifice’ in creating a ‘sustainable’ world, or as Obama once called it a “collective salvation,” that revolves around his socialist goals of redistribution of wealth and the Marxian definition of equality and fairness.

To understand what CC is all about we must revisit the 1989 National Governor’s Conference on Education called by President George H. Bush, in Wichita, Kansas. One of the speakers was Dr. Shirley McCune, Sr. Director of the Mid-Continental Regional Educational Lab under contract to the U.S. Dept. of Education. Dr. McCune laid out her radical objectives for education reform: The complete transformation and restructuring of society in which knowledge could no longer be the primary purpose of education and where government sponsored education would become the connection between sustainable development and human capital for a planned economy. If that sounds a tad Socialist – it is.

In addition to Gates funding, the National Governor’s Association, the Chief Council, and Achieve are heavily funded by your typical left-wing organizations like the Ford Foundation, the Carnegie Institute, the Rockefeller Foundation, the Rand Corporation, etc. The BBC reported fundamentalist Muslim nations that sponsor worldwide terrorism, are also connected with Common Core standards.

Curriculum for Common Core is provided by the likes of Linda Darling-Hammond, a follower of the teaching of Russian Marxist and Soviet psychologist Lev Semyonovich Vygotsky. And, in addition to the major multinational corporations like Cisco, Intel, Microsoft, GE and Pearson, nongovernmental organizations like UNESCO, the World Bank, and the Organization for Economic Cooperation and Development are preparing a lot of Common Core curriculum.

A clear example of the monopolistic hold some of the largest corporations associated with CC have over education is the Pearson Foundation, a UK publishing company, the largest textbook conglomerate in the world, operating in over 70 countries. The chief education advisor at Pearson is globalist Sir Michael Barber, a promoter of “sustainable reform” who advises policymakers to “make it [education] so it can never go back to how it was before.”

The three major textbook publishers – Pearson, McGraw-Hill and Harcourt – have bought up almost every educational publisher over the last several years and Pearson is attempting to swallow McGraw-Hill. So even as states wise up and pull out of Common Core, they will still be purchasing text books that push Common Core standards.

Brent Parrish spent a great deal of time investigating Common Core and those behind it. You can read his two articles, ‘Journey to the Center of the Common Core, Part 1; and Part 2 at this link.

“No matter how bad you think something is, when you look into it, it is always worse.” M. Stanton Evans, “Law of Inadequate Paranoia”