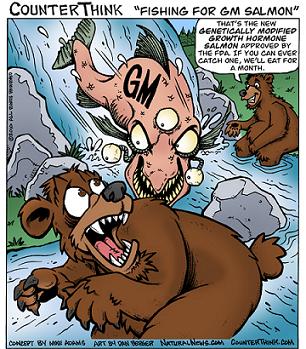 Since 1993 the FDA has considered allowing genetically modified salmon to be sold in America. But it wasn’t until 2012, with research provided by the manufacturer, that the FDA decided  this monster fish was likely safe for human consumption and would not put the environment at risk. Three years and public commentary later, they have yet to make a final approval.

GM salmon are engineered to grow about twice the rate as your typical farm-raised fish. This is achieved by inserting a growth promoting gene from a Chinook salmon and a “promoter” gene from the eel-like ocean pout, allowing the growth hormone to flow 24/7 which means a growth period of only 16 to 18 months verses your typical 36 months.

According to AquaBounty the salmon are grown in tanks on land that contain additional filters, screens, and netting used to block drains or pipes that could provide the salmon an escape route to the real world. They also claim that female eggs will be sterilized prior to leaving the facility using a process that has a 99.8% success rate. But if history is any indicator of future events, these fish will find a way into the natural environment. We’ve already seen the unintended consequences of GM crops growing where they’re not supposed to. And let’s not forget those super weeds and round-up resistant pests that are spreading havoc across America’s farmland.

George Leonard of National Geographic said he is concerned that in the future, “the prospects of even larger profits from growing these fish in the ocean will certainly create pressure for approval in these more environmentally risky ocean pen systems.” A Purdue University computer model that tracked the effects of releasing only 60 frankenfish into a population of 60,000 native species showed that there would be a complete extinction of the native species in just 40 fish generations.

A review of 80 studies published in BioScience determined that the consequences of allowing GM salmon to intermingle with nature resulted in behavioral changes and a reduced immune function. The researchers were unable to determine whether the GM salmon would overtake wild salmon, but stressed not to discount the possibility.

Dr. Anne Kapuscinski, a professor of Environmental Studies at Dartmouth College said that …”farmed salmon is a global commodity. Let’s imagine that tomorrow the FDA approved this application. The company is not going to make a profit by simply growing small numbers of salmons….This company is going to make money by selling millions upon millions of eggs to big salmon farms all over the place.”

This could be very troubling considering that some environmentalists and experts believe that escapes are an “unavoidable consequence” of fish farming. It is interesting to note that AquaBounty has one of their facilities on Prince Edward Island located next to an estuary and another facility in Panama near a river. The Panama facility was fined by regulators after a 2012 investigation revealed a failure to secure necessary permits, particularly regarding water usage and pollution, a situation which continued well into 2013. Panamanian authorities noted that the violations were significant enough to levy “almost the maximum fine allowable against the company.”

AquaBounty has permission to test and develop, not sell, GM salmon. As a result, about 62 tons of their experiments have already been dumped into Panamanian landfills. There is also a report of at least one other biosecurity lapse in which mechanical failures related to a storm resulted in “lost” salmon.

A 400 page draft risk assessment from the Canadian Department of Fisheries and Oceans revealed a growing concern that GM salmon are more susceptible to the disease-causing bacteria Aeromonas salmonicida.   The draft report also surmised that the growth hormone gene constructed by AquaBounty is not operating in a predictable manner, raising even more concerns about safety and commercial viability of genetically modified salmon.

If the FDA approves these fish on steroids it will pave the way for other GM species under development and will, one day, make GM cows, chickens, and pigs commonplace in supermarkets, or at least in those supermarkets willing to sell them and, as with all GM products, they will not be labeled.

Not only will GM salmon be a health hazard, they will pose a serious threat to marine environments and wild Atlantic salmon, currently on the Endangered Species List.