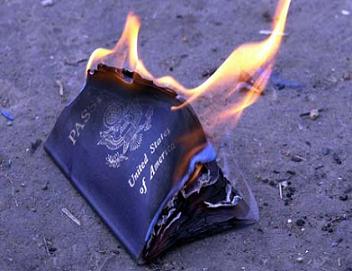 Another day, another fundamental right disappears without much fanfare from the lapdog media.

The Republican controlled House passed HR 237, the Foreign Terrorist Organization Passport Revocation Act, aka FTO, with only 15 minutes of “supposed” debate, giving the Secretary of State the unilateral power to strip you of your passport without due process of law and no recourse to challenge the status as a non-person involuntarily trapped inside or outside of US borders.

The fact that our elected lying cheating corrupt politicians sold us out yet again should come as no surprise.  After all, it was they who gave Obama the power to murder by drone and detain American citizens at will on an indefinite basis without due process of law.

According to the bill, which by the way was sponsored by Ted Poe, a Republican from Texas, the Secretary of State may unilaterally revoke or refuse to issue a passport to any individual whom the Secretary has determined has aided, assisted, abetted, or otherwise helped an organization the Secretary has designated as a foreign terrorist organization pursuant to section 219 of the Immigration and Nationality Act, 8 USC 1189. It does not define what “aided, abetted or otherwise helped” actually mean in legal terms leaving it wide open for interpretation.

The travel restriction requires no presumption of innocence, no explanation, no public presentation of evidence, no opportunity for defense, no checks and balances on the power. It does however require the Secretary to issue a report to the Senate Committee on Foreign Relations and the House Committee on Foreign Affairs but does not state that either committee can reverse the secretary’s decision.

Congress claims this will stop “alleged terrorists” from leaving the country. My question is: why stop them? I say help them pack, buy their ticket and as soon as they are no longer on American soil, burn their passports . It certainly would be a better solution than we have now where Americans who fought with ISIS are allowed back in the country and are “supposedly monitored” by a bunch of corrupt bureaucrats.

Also, one must also consider how the government defines terrorists!  We’re certainly not talking Islamic jihadist because as Obama and his merry band of useful idiots like to remind us, they are a peaceful religion and only slice off heads and crucify non-Muslims because they’re misunderstood.

With the liberal usurpation of unilateral authority to murder and detain U.S. citizens, the stretch to false accusations for nefarious purposes by this administration or any of his leftist cronies isn’t a far stretch. There is no set criteria in this new attack – the terms are undefined and there remains no appeals process. What this bill creates is an avenue for widespread abuse.

Will the Senate pass this stinker? Probably. They’ve already decided that Americans who owe back taxes should have their passports revoked and even went so far as to include it in the “transportation” bill which apparently is about everything but transportation. The IRS, and we all know how honest they are, simply has to submit a certificate to the Secretary of State showing that an individual is “seriously delinquent” in an amount in excess of $50,000. Of course I’m sure there are exemptions for all those in government positions who haven’t bothered to pay their taxes.

Just a reminder:  Prior to Hitler’s final solution, Germany confiscated the passports held by Jewish Germans. Not accusing – just saying!