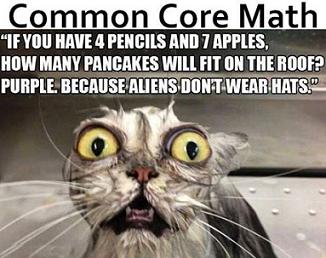 Common Core was pushed upon our children as a means to improve standards in education but, as Peter Wood, president of the National Association of Scholars, writes in his new book Drilling Through the Core: Why Common Core is Bad for American Education, in actuality, it has lowered standards in both math and English language arts, the two parts of the K-12 curriculum that Common Core covers.

“The math standards are set way below all of the Asian nations, and the U.S. language arts standards are not matched to international standards. The section on math is written by mathematicians who look upon the changes as a comprehensive lowering of standards so that students at the end of high school know a lot less math than they used to and are not prepared for college-level math.” As a matter of fact, the only way “students who plan on getting STEM degrees in college can catch up is to take math instruction outside their high school.”

The teaching of literature is not abandoned, it’s downgraded, so that you end up with a very fragmentary and impoverished view of what language can do.” It puts a burden on families to “introduce their children to a more systematic and richer reading program than they’re going to get in school.”

Standards for Common Core were created with minimal public engagement, driven by policy makers in D.C. In fact, they were developed by an organization called Achieve and the National Governors Association, both of which were generously funded by the Bill Gates Foundation, and your typical left-wing organizations like the Ford Foundation, the Carnegie Institute, the Rockefeller Foundation, the Rand Corporation, etc. The BBC reported that fundamentalist Muslim nations that sponsor worldwide terrorism, are also connected with Common Core standards.

In a nut shell, Common Core was created as nationalized education, a federal, top-down approach based on Collectivism rather than individual achievement, sold as a set of rigorous internationally benchmarked standards to bring uniformity to education.   Knowledge, understanding, critical thinking, and comprehension under Common Core standards gave way to socialist global values, beliefs, feelings and behaviors. After all comrade, one of the requirements of a good ‘global citizenship’ is the concept of ‘shared responsibility’ and ‘shared sacrifice’ in creating a ‘sustainable’ world, or as Obama once called it a “collective salvation,” that revolves around his socialist goals of redistribution of wealth and the Marxian definition of equality and fairness.

As more states attempt to wiggle out of the program, thousands of students are taking matters into their own hands – opting out of the new standardized tests. Some superintendents in New York are reporting that 60% plus of their students are refusing to sit for exams and some lawmakers, finally discovering a spine, are backing the parents and teachers who complain. Resistance has also been reported in Maine, New Mexico, Oregon and Pennsylvania. Utah and California allow parents to refuse testing for any reason but Arkansas and Texas still prohibit opting out.

The federal government has yet to cower as they hold the trump card – money. If fewer than 95% of a district’s students participate in tests in aligned with Common Core, federal money could be withheld. And while this has yet to happen, it is still the government’s whip.

Woods predicts that during the next three or four years, more states will become disenchanted with Common Core because “it is way more expensive than advertised and the results are much worse than anyone expected.” Of course, by then, the damage to the economy will have been done. “Common core will extract a major price for the U.S. in international competitiveness, but it will be a delayed reaction until the generation that has been Common Core-ized enters the job market, at which time the people who invented it and the politicians who implemented it will be gone from the scene and it will be somebody else’s problem.”  Isn’t that exactly what happens with most government programs?

When it comes to Common Core, the only option parents have now is: Do It Yourself – Teach it Yourself, and if that is not possible, hire a tutor who can do it for you. In the meantime, cry bloody murder to your school board in the hopes they will come to their senses.

“Like so many education reform initiatives that seem to arise from nowhere, Common Core is another of these ‘sweeping phanton movements’ that have gotten their impetus from a cadre of invisible human beings endowed with inordinate power to impose their ideas on everybody. It is another such vampire calculated not only to suck the freedom out of the American people, but also to suck out the brains of their children.” Sam Blumenfeld

← Hmm……Wonder how many idiots live in Greensboro, N.C.
How do you know you’re shopping in Texas? →