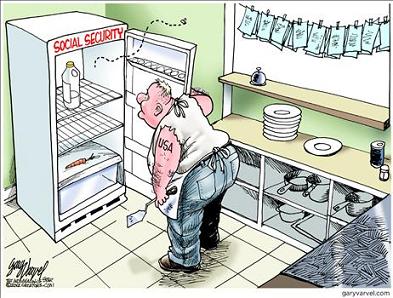 For those contemplating retirement and those that are hoping that Social Security actually exists when you are able to retire – I offer a few basic tidbits on how Social Security works.

The Social Security Administration wants you to know that benefits are intended to replace only a percentage of your pre-retirement earnings and that the way they calculate your benefit is fixed so that lower income workers get a higher return than highly paid workers.  In fact, lower paid workers could get a benefit that equals about 55% of their pre-retirement income while the average replacement rates for highly paid workers is only about 25%.    Now that you understand that the left invented Social Security as a “social justice” program, let’s continue.

Normally, Social Security benefits are adjusted each year to keep up with inflation except for those years when the government pretends inflation is nonexistent.

If you take early retirement (age 62) your benefit will be reduced by 30% which reduction still applies if your spouse dies and you opt to take his/her benefit at a later date.

Your benefits may also be affected by the Windfall Elimination Provision if you earned a pension in any job where you did not pay Social Security taxes but you had worked other jobs long enough to qualify for Social Security.  But, like all other government programs, there are exceptions to the rule.   The Windfall Elimination Provision does not apply to survivor benefits even though other laws may.  Unfortunately, there is not enough space on this website to list all those exceptions or other laws.

The longer you delay your retirement, the larger your benefit will be, that is as long as the government isn’t bankrupt.   Your payments could increase by 8% annually by delaying your retirement, up to age 70.  After age 70 there is no additional benefit to the amount you will receive.

Even if you take the early retirement option, you can still work but if you earn too much, the government will reduce your benefits. In 2015 if you are under age 65 the earning limit was $15,720.  Anything over that amount reduced your Social Security check by $1 for every $2 over the limit. During the year in which you reach full retirement age, which ranges from age 65 to 67, depending on your birth year, you can earn up to $41,880 before $1 of your Social Security benefits will be deducted for every $3 you earn above that threshold.  However, that money isn’t lost forever.  You will be entitled to a credit, so your benefits will increase beginning the month you reach full retirement age.  At full retirement age, no income restrictions apply.

Now that you understand what you have to lose, let’s concentrate on what Social Security may cost you. If your earnings exceed a certain level, up to 85% of Social Security benefits may  be taxable.  Even income sources that are normally tax-exempt, such as income from municipal bonds, plus taxable interest, dividends,  401ks, etc. must be factored into the total income equation for the purpose of computing tax on Social Security benefits.

Spousal payments can be worth as much as 50% of the higher earner’s Social Security payment.  Dual earner couples who have reached their full retirement age can even claim Social Security twice by signing up for spousal payments, then later switching to payments based on their own work record.  “If both members of the couple wait until the full retirement age of 66, then either one of the spouses could begin receiving a spousal benefit based on the other spouse’s record, and then continue to delay their benefit up until age 70, which would then maximize both of their benefits”, according to Jim Blankenship, author of “A Social Security Owner’s Manual”.

To maximize widow and widower’s benefits both spouses must wait until full retirement age to collect Social Security.  If you took early retirement which cost you about 30% of your benefits and your spouse passes away, while you are eligible to receive the larger of the two Social Security benefits,  the 30% reduction in benefits will still apply.

When FDR introduced his social justice program, participation was voluntary.  Employers and employees only paid 2% of the first $3,000 earned into the program and, until Democrats killed the provision, any social security you paid into the system was tax-deductible.

As passed, monies collected for Social Security were to be put into an independent “trust fund.”   You can thank Lyndon B. Johnson for stealing that money by moving it to the general fund to pay for his War on Poverty social justice program.  And in case you didn’t know, it was Jimmy Carter and his ilk that started giving immigrants social security even though they had never paid into the program.

Under FDR’s program, benefits paid to retirees was not taxable. Bill Clinton and Big Al Gore took care of that.  Al even cast the deciding vote.  And of course, we should not forget to give credit where credit is due.  It was Democrats and Rinos that kept voting to steal Social Security money to pay for pork projects to keep themselves in office so they could continue to steal our hard earned money.

As it stood in 2015,  Social Security had unfunded liabilities of $69 Billion, and after adding in Medicare’s unfunded liabilities you’re approaching $107 Trillion.  That is the amount of money Congress promised in benefits to people who paid into the system.  Insolvency is not the only problem facing Social Security. The system is essentially stealing from those now entering the workforce.

As the number of workers per retiree falls, from 42-to-1 in 1940 to about 3-to-1 today, on the way to below 2-to-1, the tax rate has risen dramatically. Many people of modest means pay more in Social Security deductions than they pay in income taxes. Increasing numbers of young workers now will lose money, assuming there is money available to pay for their benefits when they retire. And, almost every proposed “reform” scheme would further drive down the system’s return, increasing taxes while cutting benefits. The program has become the worst sort of fool’s bargain—at least for everyone but the politicians who take credit for handing out money to a pliant population.

Social Security is more than just a financial bad deal. The program undermines personal responsibility by discouraging saving and encouraging early retirement. Equally damaging, Social Security shifts the duty of caring for our elders to the government. As a result, many Americans end up dependent—a substantial number almost wholly dependent—on government.

Social Security  takes money that otherwise would be invested in economically productive private activities and dumps it into the Treasury, into a politically fraudulent “trust fund” for redistribution by the ruling powers that be. In 2015 it was estimated that about $560 billion disappeared into Uncle Sam’s porous pocket.

← McAuliffe Protects his A** but not Yours
John Kerry’s Confession →