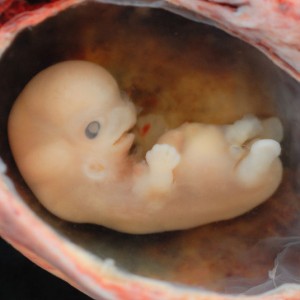 “… humanity is on the verge of becoming a new and utterly unique species, which he dubsHomo Evolutis. What makes this species so unique is that it “takes direct and deliberate control over the evolution of the species.” Calling it the “ultimate reboot,” he points to the conflux of DNA manipulation and therapy, tissue generation, and robotics as making this great leap possible… (source)

Using human stem cells inserted into an animal embryo after a gene for a specific organ has already been deleted, scientists hope the animal, carried in another host animal such as a pig or a sheep, will grow the human organ instead of its own.

The ultimate goal of this is to force animals to grow human organs for transplantation into humans with terminal diseases, but the potential implications here are staggering.

What’s worse is the “concerns” that other scientists have about this practice, things the average person who hears “free organs for sick people” would never even consider. Things like the fact that human stem cells can ultimately become any type of tissue, and according to the National Institutes of Health which released a statement regarding why it was refusing to fund the risky research, might turn into human brain cells that could evolve the donor animal’s “cognitive state”.

Because the government has refused to fund this research without further scientific review into all the potential dangers, researchers are going ahead with private funding and doing it anyway. Research farms are growing human-animal hybrids as I type this.

The scientists involved claim this isn’t playing God because it’s for a “biomedical purpose,” but you have to wonder if there’s any other way to describe it but playing God.

← Katie Couric is an Anti-Gun Fraud and Hypocrite
The U.N. Extermination Policy →