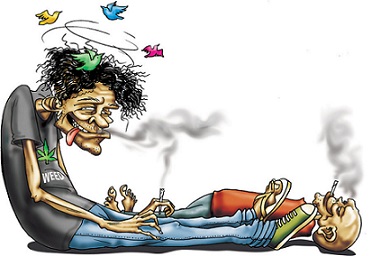 While the link between cannabis and severe illnesses, such as cancer, has previously been documented, how it occurred and the implications for future generations were never completely understood.  Now a new study has come out that says that smoking pot can alter your DNA, causing mutations that not only expose you to serious illnesses but also heightened the risk of passing disease-causing mutations to your children and their children for generations.

According to the study published in the Mutation Research journal, “Fundamental and Molecular Mechanisms of Mutagenesis,” the chemicals in pot interact with your DNA, altering DNA structure that can lead to slow cell growth and have serious implications for fetal development, potentially causing limbs or vital organs not to develop properly, or could lead to serious diseases such as cancer. The worst cancers in children exposed in the womb to pot develop in the first few years of life.

Tobacco smoke contains 4000 chemicals of which 60 are classified as carcinogens. Cannabis smoke contains only 400 compounds that include 60 cannabinoids, however, because it is less combustible than tobacco, it contains 50% more carcinogenic polycyclic aromatic hydrocarbons including naphthalene, benzanthracene, and benzopyrene, than tobacco smoke. It means that your lungs are exposed four fold to toxins and tar.

Smoking one joint a day can damage the cells in the bronchial passages which protect the body against inhaled microorganisms and decrease the ability of the immune cells in the lungs to fight off fungi, bacteria, and tumor cells.  Smokers can develop respiratory cancer, chronic bronchitis, impairment in the function of the smaller air passages, inflammation of the lungs and development of potentially precancerous abnormalities in the bronchial lining and lungs.  For patients with already weakened immune systems, this means an increase in the possibility of dangerous pulmonary infections, including pneumonia, which often proves fatal in AIDS patients.

Previous studies suggest that marijuana is a general “immunosuppressant” whose degenerative influence extends beyond the respiratory system. Scientific studies have shown that the use of marijuana as a medical therapy can and does have a serious negative effect on patients with preexisting immune deficits resulting from AIDS, organ transplants or chemotherapy, the very conditions for which it has been most often touted as a treatment. It has also been shown that marijuana use can accelerate the progression of HIV to full-blown AIDS and increase the occurrence of infections and Kaposi’s sarcoma.

It has also been suggested that marijuana is at the root of many mental disorders, including acute toxic psychosis, panic attacks, flashbacks, delusions, depersonalization, hallucinations, paranoia, depression, and uncontrollable aggressiveness. Marijuana has long been known to trigger  bipolar [manic-depressive] attacks, and schizophrenia. According to the Diagnostic and Statistical Manual of Mental Disorders, mental disorders connected with marijuana use are Cannabis Intoxication, Cannabis Intoxication Delusions, Cannabis Induced Psychotic Disorder, Hallucinations; and Cannabis Induced Anxiety Disorder.

The science is clear and unambiguous – pot is a dangerous substance. It is not like alcohol at all.  There is a reason it is classified as a Schedule I controlled dangerous substance, right along with heroin, LSD and ecstasy.  The American Medical Association, the American Lung Association and other reputable doctors and scientists all reject legalization.

So why are so many states jumping on the legalization bandwagon? They’re in it for the money. They’re playing Russian Roulette with your health and sanity.

← ‘The Passion of the Christ’ Sequel In the Works
We Need Islam Control, Not Gun Control →