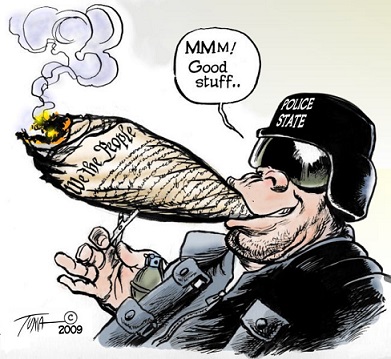 “The suppression of truth has long been among the highest priorities for the upper echelons of power and authority. For a minority elite that clings to power by the manipulation of the masses using an omnipresent cocktail of lies, deception, mass-produced ignorance and ingrained propaganda, the destruction of truth is an essential method of control. It is a formula that has worked to unmitigated success for the elite throughout history, whether the shadows of power stretch from ancient pyramids, marble temples, castles, mansions or halls of governance.”  Manuel Valenzuela

It was a given that after the latest Islamic terrorist attack in Orlando that the left would jump on the gun confiscation bandwagon just as it was a given that it would become yet “another crisis” requiring more government spying and another layer of government policing.   While these opportunists ‘never let a crisis go to waste’ defendants of the American way, none care to face the inescapable reality that since 9/11 and the introduction of numerous draconian legislative assaults on America’s freedom, Homeland Security, the FBI and other agencies charged with surveillance and law enforcement have not managed to prevent these attacks. Obviously this raises the question of what exactly the Patriot Act is really intended for since it obviously isn’t to “keep Americans safe.”

According to Eric Draitser of Counterpunch.org, even more critical than retrospective criticism of the erosion of civil liberties after nearly a decade and a half of propaganda and fearmongering, is the need to oppose the further expansion of such legislation and domestic spying programs. Indeed, while what were once considered rights are now seen as passe’, the US is staring down the barrel of a presidential election where the leading candidates are calling for even more surveillance, more government databases and billions to be wasted on the NSA, FBI, CIA, DIA, and the rest of the alphabet soup that comprises Police State USA.

In 2006 the cost of America’s surveillance state outsourced to contractors reached $42 billion or about 70% of the estimated $60 billion the government spends on foreign and domestic intelligence. Unfortunately we will never know the true extend of outsourcing because, the government and their private contractors hide behind a veil of secrecy.  According to the Federation of American Scientists, the 2017 intelligence budget will reach nearly $70 million, with $50 billion going to the National Intelligence Program.

Our Constitution is continually under siege. Congress tucked a provision in the 2012 National Defense Authorization Act to allow the military to detain U.S. citizens “accused” of being a terrorist or of supporting terrorists, without due process. Of course the government gets to decide who these “suspected terrorists” are.  Lawyers for the Obama administration informed the world that  American citizens were “legitimate targets for killing” when they take up arms against the U.S. and could be added to Obama’s kill list, setting up a precedent in which any citizen far from a battlefield could be executed by his or her own government at the president’s discretion.

Local law enforcement agencies have not only militarized with the blessing of the government, they have been testing the Constitutional rights of U.S. citizens and the news media to monitor their activities. Media blackouts are representative of a broader trend in law enforcement in which citizens have been arrested for merely recording police. Numerous states have passed laws prohibiting people from videotaping police without the officer’s consent.

The military use of drones to spy on enemy states has now been embraced by police to conduct covert surveillance on American soil. These drones can also use artificial intelligence to seek out and record suspicious behavior, whatever that may be. Some police departments want to arm these spy planes with nonlethal weapons like Tasers or bean bag guns. How long before they switch to real bullets?

The PRISM program allows the NSA and the FBI to circumvent the legal process and tap into the central serves of nine leading internet companies, extracting audio and video chats, phots, emails, documents, and connection logs. The BLARNEY system uses a device called a “splitter” to divert internet traffic that AT&T receives onto a separate fiber-optic cable connected to a room controlled by NSA designed solely to collect all internet data to be stored at enormous data storage facilities. Under BLARNEY, everyone is a target.

Since 9/ll every crisis or perceived crisis has been used to further our descent into a fascist police state.  The bulk acquisition of data on every U.S. citizen, here and abroad, is  in direct violation of the 1st, 4th, and 5th Amendments and the 6th Amendment which guarantees due process has all but been destroyed.  These were founding principles for our country, principles that the left has long regarded as an obstacle to their agenda.

In a stunningly-titled piece, “Let’s Give Up on the Constitution,”  published in 2012 in the New York Times, Louis Michael Seidman, Carmack Waterhouse Professor of Constitutional Law at Georgetown University, wrote that “No one can predict in detail what our system of government would look like if we freed ourselves from the shackles of constitutional obligation, and I harbor no illusions that any of this will happen soon. But even if we can’t kick our constitutional-law addiction, we can soften the habit.”  What left-wing Harvard educated professor Seidman is advocating is the destruction of our Republic and the implementation of an undefined system of government which inevitably means the loss of our safeguards against tyranny.

“We have indeed reached a crossroads. History may show that from this point forward, we will have left behind any semblance of constitutional government and entered into a militaristic state where all citizens are suspects and security trumps freedom. Certainly, this is a time when government officials operate off their own inscrutable, self-serving playbook with little in the way of checks and balances, while American citizens are subjected to all manner of indignities and violations with little hope of defending themselves. We have moved beyond the era of representative government and entered a new age, let’s call it the age of authoritarianism.” John W. Whitehead, “The Age of Authoritarianism: Government of the Politicians, by the Military, for the Corporations.