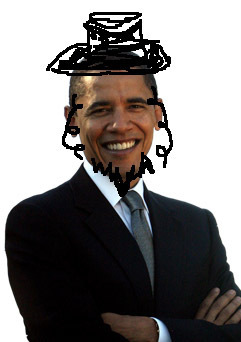 Obama introduced himself to the nation as the son of black and white parents. He has gone back and forth between Christianity and Islam like a philanderer in a bar. Now, he has added a third religion and race to complete his identity politics trinity.

At last year’s White House Chanukah dinner, he claimed to have a Jewish soul. During a synagogue speech he called himself “an honorary member of the tribe.” His former senior advisor has quoted him as saying, “I think I am the closest thing to a Jew that has ever sat in this office.”   I wouldn’t get too excited. After all he has been “Irish,” an “honorary Italian,” “the first woman President for bending gender conventions,” the first “ Gay” president and the “first Asian American” president. If you make up an ethnic group or race, by tomorrow Obama will be a member of it and by next week, he will be lecturing the rest of us on why we’re not living up to our “shared values.”

Obama’s Jewish toadies, like his multicultural frog pond toadies of all races and ethnicities, have been trying to sell Obama as a “born-again Jew” for the last seven plus years. New York Magazine even put him on the cover under a photo-shopped Kippah as “The First Jewish President” and proclaimed him as the “the best thing Israel has going for it right now.”

Forever presenting himself as a “great friend” of the Jews and a fervent supporter of Israel, Zionism and Judaism, the Zionism Obama  praises is a left-wing version of the original movement, which was evident from his speech at a decidedly leftist synagogue in Washington, whose rabbi, a self-proclaimed gay, conveniently blessed Obama’s “progressive values” that flow “directly out of the core messages of Torah,” and who is deeply in touch with the “heart and spirit of the Jewish people.”

While never missing an opportunity to lecture Jews and Israelis about what is best for them, as if he has some special insight, Obama believes as an “honorary member of the tribe” he is entitled to all the anti-Semitic jokes and all the anti-Semitic policies he wants.  So, when he demands that Israel return to the pre-1967 borders or signs off on nukes for Iran, he is showing the world that he cares about the Jewish state so much that he has to destroy it.

Obama speaks of his disagreement on numerous issues with Israel as simply a reaction to Netanyahu’s  inflammatory policies and speeches. But in truth, it is just part of his campaign to marshal anti-Israel forces in American and Europe to reduce Netanyahu’s stature in the world. According to Obama, under Netanyahu, Israel is but an “occupying power” that has “denied the Palestinian Authority,” a known terrorist organization,” the right to govern themselves in their own sovereign state, and has threatened to abandoned them at the United Nations.

Jeffrey Goldberg, Obama’s toady for heading up the media anti-Israel campaign, has been pushing the “Jewish Obama” meme the hardest. He claims that “the first Jewish president’s” impatience with Israel, and his dislike of Netanyahu is rooted in the fact that he [Obama] is “a very specific kind of Jew, an intellectual, Upper West Side, social action-oriented, anguished-about Israel liberal values Jew.” Not the bad kind of Jew who peers through a rifle scope on the Golan or pores over a Bible. That was Goldberg’s attempt at reassuring liberal Jews in America  that the man in the white House didn’t hate Israel because he was one of “them,” but because he was one of “us.” In other words, Obama’s hatred of Israel is in the finest tradition of neurotic Manhattan liberal Jews.  He also insisted that “Obama is asking Israel to be….more Jewish.” And Obama’s way to make them more Jewish is by denouncing them and threatening their existence. Similarly “Liberal Zionists” denounce Netanyahu for wanting Israel to be a “Jewish State” because they want it to live up to the “Jewish” values of Obama, Bill Ayers and Jeremiah Wright.

To the Goldbergs of this world, making Israel more Jewish means making it less Jewish. By surrendering land to terrorists, expelling Jews from their homes, dividing up Jerusalem and giving up on a Jewish State, Israel will become more Jewish. And when its last Jewish Prime Minister, Mohammed Hussein Osama, informs them that Jewish values demand the end of Israel, they will applaud him for his Jewishness.

It is unfortunate that Obama does embody the Jewish values of the liberal Jews in America because their identity is synonymous with the left. He equally embodies the Catholic values of Irish or Italian leftists or the Cherokee values of Elizabeth Warren. When your religious values have no religion in them, when your culture is a punchline and you want to sacrifice your heritage for an inspiring speech, then why not? The left’s values are self-nullifying. They destroy whatever they touch. The American left must destroy America for the sake of “American values,” just as the Catholic left must destroy the Catholic Church, and the Jewish left must destroy Israel.

“Obama once said he was a blank canvas on which people could project their thoughts and dreams, but he thinks of himself as an honorary member of every minority.  He has Muslim roots so he understands Muslims better than Islamists.  His mother was white so he understands the ‘racism’ of his ‘typical white grandmother.’  He’s Jewish which allows him to lecture Jews about Jewish values.  This is the beauty of thinking about the world in little subsets of humanity operating through ethnic solidarity: if you appoint yourself an emissary of each of these groups, you can speak to each of these groups as an insider and never be challenged for having other interests at heart.  Sadly, for Obama and for the world, he has no relationship to Jews, or kinship with Jews, and certainly no love for Judaic values.”  Ben Shapiro

Source: Barack Obama: Born Again Jew by Daniel Greenfield; Obama, the Jews, the Muslims, and Us, by Dr. Michael Ledeen