A  “Mekudeshet” festival that includes leaders of Christians, Jews and Muslims will be held in Jerusalem Sept. 4th – 23rd.   Catholic Church insiders say Pope Francis’ revelations will mark the beginning of a One World Religion. These multi-religious leaders have also announced an 11 day consecration to be performed.

The goal of the event is to create a single home for the world’s 3 major religions.

Mekudeshet artistic director Itay Mautner says, “We will see if it is possible to create a new reality. We will study, argue and pray together.”  video

About a year ago the Pope stated, “Jesus Christ, Jehovah, Allah. These are all names employed to describe an entity that is distinctly the same across the world. For centuries, blood has been needlessly shed because of the desire to segregate our faiths. This, however, should be the very concept which unites us as people, as nations, and as a world bound by faith. Together, we can bring about an unprecedented age of peace, all we need to achieve such a state is respect each others beliefs, for we are all children of God regardless of the name we choose to address him by. We can accomplish miraculous things in the world by merging our faiths, and the time for such a movement is now. No longer shall we slaughter our neighbors over differences in reference to their god.”

I totally disagree with the Pope. I’m not sure what he’s been reading but it apparently isn’t the Holy Bible. One can not merge the one and only God with a made-up god named Allah.

Moses understood this. When he encountered the call of God that came from the burning bush, Moses asked God, “If I come to the people of Israel and say to them, ‘The God of your fathers has sent me to you,’ and they ask me, ‘What is his name?’ what shall I say to them?” (Exodus 3:13). God answered Moses, “I Am who I Am” (Exodus 3:14). God told Moses, “Say this to the people of Israel, ‘The Lord, the God of your fathers, the God of Abraham, the God of Isaac, and the God of Jacob, has sent me to you.’ This is my name forever, and thus I am to be remembered throughout all generations” (Exodus 3:15).

We have no right to modify or to revise them — much less to reject them. Jesus Christ made this abundantly clear. In the simplest way imaginable, Jesus teaches us to know God as Father, and to use this name in prayer. The Lord’s Prayer begins with the words, “Our Father, who is in heaven.” By the grace that God has shown us in Christ, we can truly know Him as Father.

Muslims do not speak of God as their heavenly Father. In the Islamic faith, Allah is not only a different name for god; the deity it designates is far more impersonal than the God of the Bible. Father—the very name that Jesus gave us as the designated name for use in prayer.

Furthermore, Muslims claim that Allah has no son. So how can the Pope even compare our Father in Heaven with Allah. Oil and water will not mix.

Christians believe in only one God, and He is the Father who sent the Son to save us from our sins. Allah has no son, and, thus, Christians cannot know God as Allah. In this light, Muslims and Christians do not only use different names for God; in reality, Allah refers to a different god.

During the Pope’s time in Jerusalem he also is expected to announce his belief in the possible existence of extraterrestrials which at an earlier time he jokingly stated he would baptize them if they ever visit Earth.  But the Pope isn’t the only one with an opinion about being visited from space.

These comments came from Grand Ayatollah Naser Makarem Shirazi, who operates his own website to promote his views. In responding to a question about the “arrival of the Mahdi – the Hidden Imam who is the equivalent of the Messiah in Shiite Islam he stated, “The Mahdi’s arrival will be high-tech, as befits the modern age. “It is like a spaceship and like other swift and amazing space vessels that are found [only] in stories today, but nobody knows how close [these vessels] come to truth and reality. Maybe it will be like [a spaceship] but in any case it is not a spaceship.”

Well that certainly cleared things up.

But we hear from yet another.

In this video General Mark A Milley spoke of the “little green men” as being potential adversaries that military officers will fight one day.

It was told today by those in the know that holographic images of tanks and war machinery were projected over the desert to the Iraqis to scare them into submission during Desert Storm. So there are two separate weapons. One projects images in the air while the other projects images into your mind.

Blue Beam consist of 4 steps to implement a new world religion for the new world government. The final stage of this plan will be to convince all people that an alien invasion is imminent and a consolidation of governments will be the only way for mankind to survive.

Wernher Von Braun, head of NASA’s Marshall Flight Center predicted mankind would have a series of “boogey men” solely designed to manipulate them. A fear of Russia, a fear of terrorism, fear of asteroids hitting earth, and last mankind would be manipulated into believing Earth would be attacked by aliens. The end results would be a unification of the planet. A One World Government.

So now we see the One World Government and the One World Religion rearing their ugly heads. Buckle up people. We’re in for a bumpy ride! 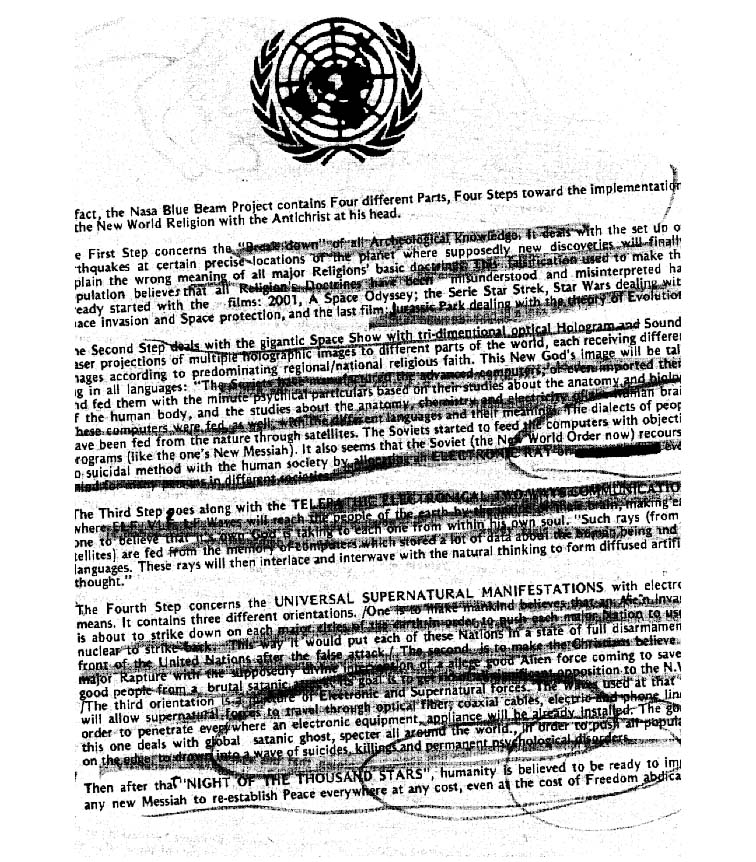 ← Ted Gunderson Former FBI Chief – Most Terror Attacks Are Committed By Our CIA And FBI
Miracles, Absent The Miracle Maker →