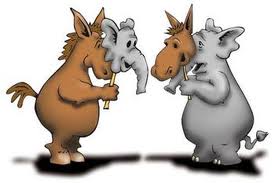 A majority of Americans are either ill-informed, uneducated, delusional, foolish, feel entitled or are just plain lazy to the point where they will continue to vote for the Party or candidate they feel will give them more and more free stuff.

Young kids espousing socialism over capitalism; rich liberals with their guilt and hypocrisy about how and why we got where we are; minority groups who have been convinced they’ll never survive without help from the government; and rabid, single issue pro-abortion voters have been organized and motivated to keep the Federal pig trough flowing.

For Those That Accuse Donald Trump of Destroying the Republican Party, wake up!  It was not that long ago that George W. Bush was in the White House with a Republican majority in both the House and the Senate.  Did they eliminate the departments of Education, Energy, Agriculture, anything? How about the budget – was it cut? Did we reduce the deficit, even when you put the cost of the wars aside, did we do anything about spending or reforming entitlements? The answer is a big fat no. In fact, Republicans in the House, Senate and White House spent like there was no tomorrow and actually created new entitlements!

People may be disgusted with Democrats, but at least they know who they are. Who are Republicans? They say they’re for limited government, but when they had the chance, what happened – anything but. They’re in control of the nation’s purse strings – all they had to do was be good stewards of the economy, put into motion some simple steps in entitlement reform, hold the line against Obama’s left-wing agenda, blast apart the Terrorist and defund planned parenthood.  How did that go?

The Republican Party has wasted the trust we put in them by appeasing special interest groups with a hope of lining their pockets.  They continue to pay lip service to principles they only claim to represent, doing everything within their power to blur the line between Republicans and Democrats.  They’ve become Democrat lite, except, instead of being less filling, they’re full of bull.

Let’s face it, if Bush opened Pandora’s box when it came to snooping and spending, Obama and his Democrat-lites blew the box up.  And continue to do so. According to several media sites, McConnell is preparing to cut another deal with Obama on the Continuing Resolution (CR) that increases spending, rewards corporate cronies and creates a lame duck session immediately after the election.  Specifically, the CR spends a total of $174 billion over the budget caps set in 2013 and expands cronyism by allowing the Export-Import Bank to finalize deals with over $10 million that it current can’t approval.  And, since the CR only funds the government for only 10 weeks, Congress can do even more harm during the lame-duck session and during the holidays when few Americans are paying attention.

So for all you NeverTrumpsters  who are providing fodder for the left by further dividing what is left of the Republican party, hold tight to those principles because that might be all you have left after the November election because Hillary will win and continue Obama’s destructive agenda for another 4 years.  So Trump is not a conservative – hell he’s not even a Republican or at least what being a Republican once meant.  But is that so bad considering how the Republican party sold us out during the last 7 plus years of Obama’s reign?

Thanks to little or no resistance by our current Republican leadership, we’re living in a soft tyranny where the IRS denies conservatives their First Amendment rights; the Attorney General runs guns to drug cartels in a scam to erode our Second Amendment rights;  Hillary sells arms to Muslim terrorists, Obama side steps  Congress by  creating, changing and denying laws he doesn’t like, and the NSA is doing who knows what with every American’s phone calls, emails, texts, whatever – unless you’re in a Mosque, of course – then your Fourth Amendment is safe.

I have one question for the Republican elite – Whose Side Are You On!  It certainly isn’t America’s workers and taxpayers.

You can read Joe Wurzelbacher’s article in full at this link.

“Evil and incompetence are almost always intertwined. As to justify its behavior, evil has to continually rationalize away the truth.  To do so requires habitually lying about that which reality consists.  When done long enough, the ability to recognize reality is lost and recognizing reality is the most basic prerequisite for competence.”  Geoffrey Britain