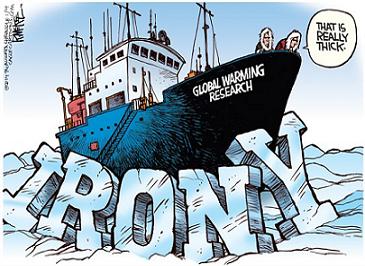 In 2007 Big Al warned us that the North Pole was going to fall off a cliff and totally disappear in seven years. Well, it’s been seven years and guess what? Florida isn’t swamped, New Yorkers aren’t boating to work and the Arctic ice cap expanded in 2013 and 2014.

The U.S. National Snow and Ice Data Center, co-funded by NASA, revealed that on August 26 of 2014 the area of Arctic Ocean with at least 15% ice cover was 5.62 square kilometers, the highest since 2006. The Danish Meteorological Institute suggested that ice growth increased at least 63%, from 2.7 to 4.4 million kilometers.

To be honest, Big Al wasn’t the only one pushing the scam. Our current Secretary of Embarrassment promoted Al’s bogus claims in 2009, along with all those environmental organizations already making big bucks off the scam. And it never ends! Professor Peter Wadham of the UK jumped in with the bogus claim that the Arctic would  be ice free by September 2015 even though the IPCC said that they had “medium confidence” that ice levels would “likely” fall below 1 million square kilometers by 2050. And don’t even get me started on all the National Geographic propaganda documentaries hoping that if they promote the lie long enough we’ll all succumb to the hysteria.

Between 1989 and 2010 Congress actually rejected nearly 700 cap and tax bills that the left claimed would stop global warming in its tracks but rejection never slows Obama and his band of left-wing environmental cronies.   Even with the world collapsing around us, Obama is determined to use executive action to impose his anti-hydrocarbon agenda, slash fossil fuel use, bankrupt coal and utility companies, make electricity unaffordable and “fundamentally” transform our economic, social, legal and constitutional system, even if it kills us.

Obama’s war on hydrocarbons is not just a war on coal country, it’s a war on America’s livelihood and living standard, it’s a war on small businesses and entire communities. Twenty-one states rely on coal to produce 40 to 96 percent of their electricity.

As the EPA carbon rules kicked in hundreds of base load coal-fired plants have closed or will be forced into premature retirement by 2020, accounting for more than 15% of the U.S.’s total installed capacity.  Enough electricity to power nearly 90 million homes and small businesses will disappear. If you think that amount of power can be generated by expensive, unreliable, habitat-gobbling wind or solar power, think again!  Even if we could produce enough solar-generated electricity to replace what we lost, the Energy Information Administration says that it will be more than twice the cost of electricity from natural gas by 2018.

But it gets worse! Obama’s regulatory agenda on greenhouse gases is much more expansive than just this single regulation. He has issued a far-reaching regulatory decision that a metric ton of C02 has a “social cost” of $38, which according to the U.S. Energy Information Administration,  “can have the same consequences for energy prices, production and consumption as the direct payment of a cash subsidy or the imposition of a tax,” adding 11% to the price of gas and 30% to the price of electricity by 2022.  A fee on carbon emissions is the centerpiece of the left’s attempt to institute a cap and trade tax on American industry.

Numerous creditable sources such as the Institute for Plasma Physics in the Netherlands, the U.S. Department of Agriculture, the Congressional Budget Office, the Congressional Research Service and the Government Accountability Office have affirmed that higher energy costs will have a chilling effect on the U.S. economy. Millions will lose their jobs – in coal mines, power plants, factories, shops, etc.   Families will be forced to cope with even more stress, and depression as the ability to feed, clothe and care for their families diminishes.

The EPA has already admitted that these new carbon rules are not for the environment but are seen as an investment opportunity for the already wealthy big green machine. AND THEY SEE NOTHING WRONG WITH THAT.

Most importantly, vote this November – If your Congressman is up for re-election and supports the fake climate change agenda – THROW THE CHARLATAN OUT!

And remember when you vote, Hillary Clinton as been part of this agenda since its inception.  A vote for Hillary is a continuation of special interest organizations and the United Nation’s control over America’s resources.

We must restore at least a modicum of constitutional checks and balances to a system which has vested far too much power in an unaccountable Executive Branch that shows total disdain for honesty, transparency and working families.