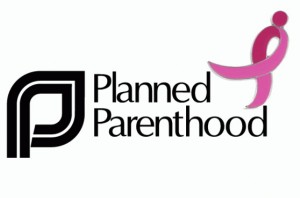 Why would an organization so dedicated to stopping breast cancer continue to pour money into Planned Parenthood: a group that profits off of pushing abortions and contraceptives (both proven to be directly linked BACK to breast cancer).  Doesn’t seem to make much sense…

Every year thousands of women train and prepare to Race for the Cure organized by Susan G. Komen for the Cure, the world’s largest breast cancer nonprofit during the month of October which is Breast Cancer Awareness Month.  Almost every product on the shelves, from batteries to blenders, turn pink and contribute a portion of their sales.  And, while most people recognize the pink ribbon, they do not know that SGK is a large contributor to Planned Parenthood.

Years ago, after numerous protests, a drop in donations,  and opposition from pro-life groups, Komen  announced that it would stop funding Planned Parenthood.  In retaliation, Planned Parenthood used its supporters in Hollywood and the mainstream media to  thoroughly castigate and trash Komen.  In 2015 Komen admitted that it has resumed funding the abortion company to the tune of hundreds of thousands of dollars annually, claiming that the donations only funded breast cancer screenings, even though the money is fungible and dollars for such screenings actually free-up Planned Parenthood funds to be used to promote and perform abortions.

In a 2009 open letter to donors, SGK went so far as to claimed that they do so much good that it was okay for them to support the murder of innocent babies; that two Catholic ethicists said it was okay; and that there was no direct link between breast cancer and abortion.

There are studies that show strong links between abortion and breast cancer, especially in young women who have never given birth, studies which groups like SGK and Planned Parenthood try to suppress.  These studies have been disputed for years, but in an article “Planned Parenthood Deepens Link to Breast-Cancer Group,” Jill Stanek uses the most basic of logic to explain how abortions cause more breast cancer, at least indirectly.

Pro-life is a big deal to those of us who refuse to support the murder of innocent babies so it is imperative that  we know where our donation money is spent. Knowingly giving money to help the pro-abortion agenda is not “morally permissible” in our Christian faith, despite what the Susan G. Komen for the Multiple Causes website may say.

Know what your contributions  support before you donate.

← Why Does The Government’s Rainbow Always End At Taxpayers’ Doors?
By The Numbers →