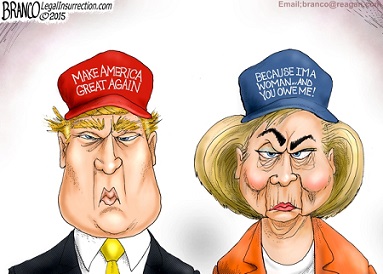 Angelo Codevilla, in an article published at the Claremont Institute, claims that the 2016 election is sealing our transition from a Republic to some kind of Empire and regardless of the outcome, it will not change that trajectory. The only thing we know for certain about this election is that either we continue in the same direction under Hillary Clinton and Kaine, but faster and without restraint, or that there is the possibility of something else with Donald Trump.

What goes by the name of constitutional law has been eclipsing the Constitution for a long time. Over the past half-century, presidents have ruled not by enforcing laws but increasingly through the administrative state where agencies not only write their own rules but interpret them, and punish unaccountably. We have watched the Supreme Court invent rights where there were none, e.g. abortion, while trampling ones that had been the Republic’s spine, such as the free exercise of religion and freedom of speech. Through the abuse of SCOTUS, we’ve learned that the word “public” can mean “private” (Kelo v City of New London), that “penalty” can mean “tax” (King v Burwell), and that holding an opinion contrary to its own can only be due to an “irrational animus” (Obergefell v Hodges).

Judicial decisions and administrative practice have divided Americans into “protected classes,” possessed of special privileges and immunities, and – everybody else. Equality before the law and equality of opportunity are memories. America is no longer the “land where our fathers died,” nor even the country that won WWII. It would be surprising if any society, its identity altered and its most fundamental institutions diminished, had continued to function as before. Ours does not and it is difficult to imagine how it can do so ever again.

Because the ruling elite from both sides of the aisle have combined forces to ignore our Constitution, today’s American regime is what Max Weber called the “Tsarist” regime on the eve of the Revolution: “fake constitutionalism.” Such fakery is self-discrediting and removes anyone’s obligation to restrain their passions, it is a harbinger of revolution and of imperial power, of relegating the U.S. Constitution to history’s dustbin.

In today’s America, a network of executive, judicial, bureaucratic, and social kinship channels bypasses the sovereignty of citizens. Our imperial regime, already in force, works on a simple principle: the president and the cronies who populate these channels may do whatever they like so long as the bureaucracy obeys and one-third plus one of the Senate protects him from impeachment.   If you are on the right side of that network you can make up the rules as you go, ignore or violate any number of laws, obfuscate or commit perjury about what you are doing, and be certain of your peer’s support. Because disdain for ordinary Americans is this ruling class’s chief feature, its members can be equally certain that all will join in celebrating each, and in demonizing their respective opponents.

The Democratic Party, regardless of its standard-bearer, will use a victory to drive the transformations that it has already wrought on America to quantitative and qualitative levels that not even its members could imagine. We can be sure of that because what it has done and is doing is rooted in a logic that has animated the ruling class for a century, and because that logic has shaped the minds and hearts of millions of this class’s members, supporters, and wannabes.

Progressivism’s programs have changed over time but its disdain for how other Americans live and think has remained fundamental. The media reacted to Clinton’s remark that “half of Trump’s supporters could be put into a basket of deplorables” as if these sentiments were novel and peculiar to her. In fact, these are unremarkable restatements of our ruling class’s perennial creed.

The pseudo-intellectual argument for why  “deplorables” have no right to their opinions is that giving equal consideration to people and positions that stand in the way of Progress is “false equivalence,” as Obama put it, and as stated in numerous articles by the left-wing media. In short, devotion to truth means not reporting on Trump and people like him as if anything they have to say is of value. Rejecting that true and false, right and wrong are objectively ascertainable is part of this class’s DNA, no corpus of fact or canon of reason restrains it or defines its end-point.

As Mao Tse-Tung used to say, “a fish begins to rot at the head.” If you want to understand why any and all future Democratic Party administrations can only be empires dedicated to injuring and insulting their subjects, look first at their intellectual leaders’ rejection of the Republic’s most fundamental principles.

We have stepped over the threshold of a revolution. It is difficult to imagine how we might step back, and futile to speculate where it will end. Our ruling class’s malfeasance, combined with insult, brought it about. Donald Trump did not cause it and is by no means its ultimate manifestation.

Electing Trump would result in an administration far less predictable than any Democratic one. In fact, what Trump would or would not do, could or could not do, pales into insignificance next to the certainty of what Democrats will do. And that is what might elect Trump.

Read “After the Republic” by Angelo M. Codevilla, at this link.