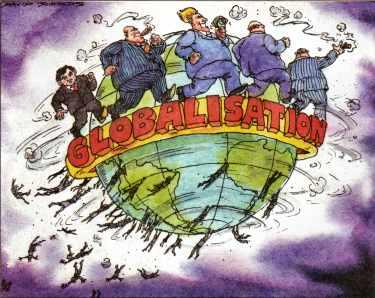 “Globalization creates economic policies where the transnationals lord over us, and the result is misery and unemployment.” Evo Morales

Globalization has created a class war between wealthy investors and anyone that works for a living. It is a double-edged sword, cutting people in on international communication and cooperation, but increasingly cutting people out of the benefits.

Pitched 20 years ago as a strategy that would raise all boats in poor and rich countries alike, globalization was presented to us through free trade agreements that promised to  lower costs of goods, to make the entire world a better place to live,  to solve poverty and unemployment, and to bring democracy to third world countries. Unfortunately what we discovered is that free trade is rarely free, at least in the sense of equally powerful participants choosing to trade for mutual benefit. There are still many barriers between rich and poor nations, tyrants still rule the majority of the world, unemployment and poverty is still rampant and, the only ones to profit have been the wealthy ruling elite.

Globalization is a marketing buzzword, designed to cast an ancient, predatory practice as some sort of new and improved instrument of progress. In actuality it is a return to economic colonization, a world in which the wealthy exercise control through the money supply, production and distribution of goods and essential services. The monetary system runs the financial cartel, and the financial cartel runs the network of global corporations which supply the nations with food, oil, and other essentials. In essence, globalization is a return to the predatory practices of the dope-running, slave-trading British East India Company, aided by modern technology.

It has created a world where the income gap between the richest and poorest are widening ; where corporations are encouraged to take advantage of tax havens and cheaper labor to move U.S. jobs overseas; where millions of jobs have been forever lost.  It created a climate where Americans lost trillions on wages, retirement funds and savings, and many lost their homes while Obama borrowed, printed and distributed trillions to multinational corporations, financial institutions and wall street. It is a world where globalization has a negative impact on the quality of politics and public life by placing restrictions on governments’ powers to intervene in their own economies, and, thereby limiting people’s power to exercise political control over their economic lives.

Globalization has allowed corporations to become too powerful and too influential in political decisions around the world. Some experts even suggest that globalization is the leading cause of the spread of communicable deadly diseases, the cause of exploitation of children forced to work in inhumane conditions, an increase in human trafficking, and the destruction of numerous cultures around the world.

The advance of globalization has not been smooth nor pain-free.   Both NAFTA and the South Korean KORUS trade agreements might have been good for Wall Street and the multinational corporations but they eliminated jobs in America and expanded our trade deficit.  The upcoming Trans Pacific Trade Agreement will do more of the same and maybe worse as the end results will pile on top of the damage already done by NAFTA and KORUS.

Globalization is like being overwhelmed by a snow avalanche. You can’t stop it – you can only swim in the snow and hope to stay on top. While we’re past the point of stopping it, there are many policies and strategies that can be employed to make it more equitable for America, such as enforcing trade laws, making certain the competition plays by the same rules and halting the drain of our technology and Research and Development to our competitors and enemies.

“All levels of society are being reshaped by  globalization. The individual may find her/his livelihood threatened or identity thrown into question; localities and whole regions are forced to recreate themselves or die in the face of new economic forces; and nation-states themselves experience steadily decreasing freedom of action and ever closer ties to each other. At the moment there is a serious contradiction between the fact that globalization is in full swing, and the fact that existing processes of global governance lack sufficient power, authority and scope to regulate and direct this process toward beneficial ends. As a result globalization is often disruptive and inequitable in its effects. It has also posed new challenges for existing public institutions while at the same time weakening their autonomy and support; and, paradoxically, provided the means for those it excludes culturally or economically to organize against its subordinating and homogenizing force…” Charles Larche III