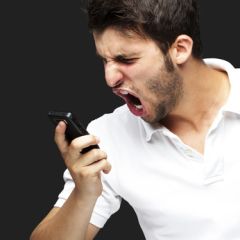 Road rage, car rage, plane rage, phone rage… there seems to be a rage for everything these days! Rarely a week goes by without some report in the media about someone who has ‘lost it’ as the red mist descended. There are angry people in supermarkets, on line, on buses, in cinemas, at restaurants… Is nowhere safe anymore from our anger? How and why did we become such an Angry Nation?

Some try to place the blame on Obama and his left-wing nuts for the current state of crazy. After all, Obama, as a follower of Alinsky, is well versed in the destructive Marxist philosophy and did use most of his time in office to inflict wound on top of wound during his eight years in office.   Others are laying the blame at the foot of our new President, Donald Trump, even though he has only been in office for a little over one week.  As a Christian I lean more toward the Word to explain our current state.

We read in Isaiah 3:4-5 that God said he would give children and babes to be our rulers and the people would be oppressive against each other, the young would be insolent against his elders and the despised against the honorable. Babes as used in verse 3 is very interesting because the Hebrew word is not babe as we know it; it is actually taaluwl meaning to be caprice, a tyrant, or delusional, based on the prime root alal to maltreat, to be abusive, or mocking. What God is saying is that in the end times he would give us politicians with the minds of children and tyrants or would-be tyrants to rule over us; that our children would be rude and arrogant; and factions of society would fanatically war against others.

2Timothy 3:1-7 tells us that in the last days “perilous times” shall come. For men “shall be lovers of their own selves, covetous, boasters, proud, blasphemers, disobedient to parents, unthankful, unholy, without natural affection, trucebreakers, false accusers, without self-control, fierce, despisers of those that are good, traitors, heady, high-minded, lovers of pleasures more than lovers of God; having a form of godliness but denying the power thereof…For of this sort are they which creep into houses, and lead captive silly women laden with sins, led away with divers lusts, ever learning and never able to come to the knowledge of the truth.”

In today’s world, truth has also become a rare commodity. We read in Isaiah 59:4-9 that the people would “trust in vanity and speak lies; they conceive mischief and bring forth iniquity….Their feet run to evil, and they make haste to shed innocent blood; their thoughts are thoughts of iniquity; wasting and destruction are in their paths…Therefore justice is far from us, neither doth righteousness over take us; we wait for light (Christ) but behold darkness; for brightness, but we walk in darkness (Satan).”

God inspired Isaiah to write this some 2,700 years ago yet it describes the situation we find ourselves in today. Our world has just about reached the limit of God’s mercy and forbearance. Man’s pride and arrogance, his greed and selfishness, his violence and brutality have reached a level which is intolerable.

Nearly two thousand years ago the disciples of Christ asked “What shall be the sign of thy coming, and of the end of the world?” (Matthew 24:3, KJV) Note that the disciples weren’t talking about a world in the sense of our physical planet. The Greek word translated world is aion from which we get the English word eon . The two mean essentially the same thing—an age, an epoch, an era.

Christ responded by listing several warming signs, the first of which was a massive deception of His people by those claiming to be teachers of His word, but who actually were part of Satan’s deception. He also said there would be many wars and other conflicts between nations and ethnic groups. (Read Matthew 24, Luke 21 or Mark 13).

Have we reached that point? Christ tells His followers to learn the parable of the Fig Tree which will give us the season. (Matthew 24). When his BRANCH is yet tender, and PUTTETH FORTH LEAVES, ye know that SUMMER is nigh: So likewise ye, when ye shall see all these things, know that it is near, even at the doors. Verily I say unto you, This generation shall not pass, till all these things be fulfilled. Heaven and earth (eon –age) shall pass away, but my words shall not pass away. But of that day and hour knoweth no man, but God. Watch therefore: for ye know not what hour your Lord doth come But know this, that if the good man of the house had known in what watch the thief would come, he would have watched, and would not have suffered his house to be broken up. Therefore be ye also ready: for in such an hour as ye think not the Son of man cometh.”

Most Biblical scholars believe this prophecy was fulfilled when Israel became a nation in 1948.

← Alinsky Said It Best
Why Is America So Rich? →