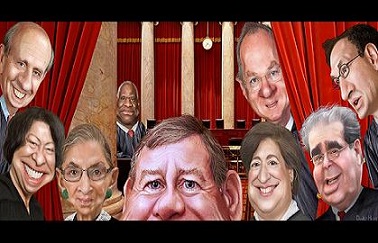 According to some pro-lifers Congress should be ashamed that they have allowed the murder of innocent unborn babies to continue unabated when they hold in their hand the ability to end this senseless massacre.  But do they?

In Roe v. Wade SCOTUS did not rule that a woman had a Constitutional Right to an abortion. What they “discovered” was so-called “emanations” of “penumbrae” of the Constitution that they saw as a Due Process right.  In English – the Court found some “abstract” right that “existed to an uncertain degree” within the Constitution that prevented  government from telling women they couldn’t  murder their unborn babies.

The Court also admitted that as mortal men they were not in a position to speculate as to when life began, and declared if the suggestion of personhood was established, the fetus’ right to life would be guaranteed specifically by the 14th Amendment. The Court’s dissenting opinion by Justice Byron White, concluded that there was nothing in the language or history of the Constitution to even support the Court’s judgment. “The Court simply fashions and announces a new constitutional right for pregnant mothers [410 U.S. 222] and, with scarcely any reason or authority for its action, invests that right with sufficient substance to override most existing state abortion statutes….” Justice White not only dissented but later made repeated attempts to overrule it.

Working from what the Court ruled, would it be possible to pass legislation declaring unborn children “persons” as defined by the 14th Amendment, Section 5, which would entitled them legal protection and remove them from the jurisdiction of the Supreme Court? Just as the logical development of the Declaration’s recognition of man’s inherent liberty required federal intervention to abolish slavery, wouldn’t acknowledgement of the inalienable right to life favor federal intervention to end abortion?

Legal opinions vary. Some argue that any legislation would run against a constitutional principle that SCOTUS declared in a 1997 decision in City of Boerne v Flores, that Congress didn’t have the power under Section 5 to redefine a Constitutional right that had been spelled out by the court, even though they themselves keep finding these “abstract” rights that may exist somewhere in a galaxy far, far away.

Contrary to popular belief, The Supreme Court is not the ultimate, sovereign institution in the U.S. nor was it ever meant to be such. The first chief Justice, John Marshall, fearful that SCOTUS could become a powerless institution in American political life, used a political maneuver in Marbury v. Madison, 1803, to create the doctrine of Judicial Review which gave the Court the ability to declare the Constitution to mean what the Court says it means.

Thomas Jefferson wrote in 1823 that “… the judiciary bodies were supposed to be the most helpless and harmless members of the government. Experience, however, soon showed in what way they were to become the most dangerous; … the insufficiency of the means provided for their removal gave them a freehold and irresponsibility in office; …their decisions, seeming to concern individual suitors only, pass silent and unheeded by the public at large;… nevertheless, become law by precedent, sapping, by little and little, the foundations of the constitution, and working its change by construction, before any one has perceived that invisible and helpless worm has been busily employed in consuming its substance. In truth, man is not made to be trusted for life, if secured against all liability to account.”

Considering that the Court has overstepped its bounds many times to find “abstract” rights for murder, for same-sex marriage, etc., perhaps it is time to curb the Court. Some would suggest that this power lies in the Executive Branch since as Alexander Hamilton suggested, “the executive is the one with the sword.” Judicial decisions are not self-enforcing, after all, the Executive executes the law.

Andrew Jackson refused to enforce the Court’s decision in Cherokee Nation v. Georgia on the Indian removal. Abraham Lincoln refused to follow Chief Justice Roger Taney’s order in Ex parte Merryman to end suspension of habeas corpus after the Civil War broke out. In his First Inaugural Address, Lincoln also made clear that the Court’s decision in the Dred Scott case could not preclude the political branches of the government from going ahead and acting on slavery in the territories. In a memorable line, he said if it were otherwise “the people will have ceased to be their own rulers, having to that extent practically resigned their Government into the hands of that eminent tribunal.”

Maybe as Professor of Political Science and Legal Studies Stephen Krason reasons, “it’s time to readjust our thinking and restore the Supreme Court to the place and powers it was intended to have in our constitutional order—before it further damages the very Constitution that created it and extends the cultural erosion it has been a main cause of. This requires recovering the constitutionally based checks on the Court which long ago fell into a state of disuse, and the only realistic one now—when we have the right president—is not mere executive appointment but executive resistance.