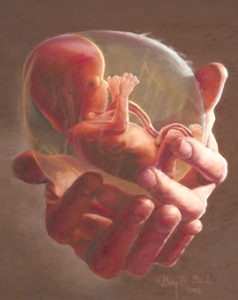 Is it possible that, to the left, “unwanted” actually means “not worthy of life?”    Is it even possible to compare the wrong caused by procuring the death of an innocent unborn baby, to the murder of one that has already been born?

Stanek soon discovered that the method Christ Hospital used to murder babies was induced labor, aka, “live birth abortions.” For this particular abortion procedure doctors do not attempt to kill the baby in the uterus – the goal is to deliver a premature baby which is allowed to die during the birth process or soon thereafter.   To commit induced labor abortion, a doctor or resident inserts a medication into the mother’s birth canal close to the cervix. The cervix is the opening at the bottom of the uterus that normally stays closed until a mother is about 40 weeks pregnant and ready to deliver. This medication irritates the cervix and stimulates it to open early. When this occurs, the small second or third trimester pre-term, fully formed baby falls out of the uterus, sometimes alive.

By law, if an aborted baby is born alive, both birth and death certificates must be issued. Ironically, at Christ Hospital the cause of death often listed for live aborted babies is “extreme prematurity,” an acknowledgement by doctors that they have caused this death.  What happened to their oath to do no harm?

It is not uncommon for a live aborted baby to linger for an hour or two or even longer.  At Christ Hospital one of the aborted  babies lived for almost an entire eight-hour shift. Some of the babies are born healthy because Christ Hospital will also abort for life or “health” of the mother, and also for rape or incest.  In the event that an aborted baby is born alive, they receives what the hospital refers to as “comfort care,” defined as keeping the baby warm in a blanket until she dies. Parents may hold the baby if they wish. If the parent who procures the death doesn’t want to touch her child, a staff member cares for the baby until they die.  Unfortunately, there isn’t always staff around to comfort the dying child so they are taken to the “Comfort Room,” which allows the “parents” to have pictures taken of the child they discarded.  The Comfort Room also includes baptismal supplies, gowns and certificates, foot printing equipment and baby bracelets for mementos.  Sick or what? But I guess that it was a step up from the Soiled Utility Room where babies where once deposited to die.

While State Senator in Illinois, our former “Christian” president actually voted three times against the “Born Alive Infants Protection Act,” claiming he could not support it because it did not include the federal neutrality clause, a clause declaring that the bill did not protect a baby in utero.  In other words he said he couldn’t support a bill that allowed a child that survived an attempted murder to continue existing because it might prevent abortion centers from murdering children while still in the womb.

During the trial of the vile murderer Kermit Gosnell,  charged with the gruesome death of at least four babies born alive as the result of botched abortions,  a former employee described how she heard a baby scream during a live-birth abortion, which she said “really freaked” her out.  “I can’t describe it. It sounded like a little alien,” she told the judge.  The baby in question was about 18 to 24 inches long.

Planned Parenthood, aka Murder, Inc., also advocates for infanticide.  Their lobbyist testified before a state legislature that if a baby was born alive as the result of a botched abortion, they believed the decision whether to provide the baby struggling for life on the abortion clinic table lifesaving support, “should be between the patient and the health care provider.”   What health care provider?  Can you call someone who willingly takes the life of another human being a health care provider?

“More than a decade ago, a Supreme Court decision literally wiped off the books of fifty states statutes protecting the rights of unborn children. Abortion on demand now takes the lives of up to 1.5 million unborn children a year. Human life legislation ending this tragedy will some day pass the Congress, and you and I must never rest until it does. Unless and until it can be proven that the unborn child is not a living entity, then its right to life, liberty, and the pursuit of happiness must be protected.”   Ronald Reagan