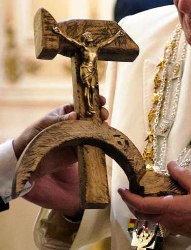 “Like Obama, Pope Francis is unable to see the problems that are really endangering his people. Like Obama he mistakes the faithful for the enemy, the enemy for his friend, condescension for respect, socialism for justice and capitalism for tyranny.” Adam Shaw

The California based Pacific Institute for Community Organization (PICO), cosponsored a joint conference with the Vatican’s Integral Human Development, the US Conference of Catholic Bishops and the Catholic Campaign for Human Development in February. The Vatican, represented by Peter Cardinal Turkson, presented a message from Pope Francis which accused capitalism of causing “enormous suffering….assaulting people’s dignity and our Common Home to sustain the invisible tyranny of money that only guarantees the privileges of a few….The economic system that has the god of money at its center, and that sometimes acts with the brutality of the robbers in the parable [Good Samaritan] that inflicts injuries that to a criminal degree have remained neglected.” Some phrases in the papal message were hard to understand as when he exhorts popular movements “to defend our Sister Mother Earth.”

In other words the Pope, rather than confront Socialism and Communism which have reduced hundreds of millions to enslavement and misery, has decided that  free enterprise and a market economy is now the world’s enemy along with America’s sovereignty which according to Bishop Robert McElroy of San Diego,  is being used to assault undocumented immigrants.   “We must disrupt those who would seek to send troops into our streets to deport the undocumented, to rip mothers and fathers from their families. We must disrupt those who portray refugees as enemies rather than our brothers and sisters…We must disrupt those who train us to see Muslim men, women and children as forces of fear rather than as children of God….”

The final message from the meeting  was a compilation of verbal assaults against America, against whites, against capitalism, and our President.  “Racism and White Supremacy are America’s original sins. They continue to justify a system of unregulated capitalism that idolizes wealth accumulation over human needs.” The document calls on every Catholic parish to declare themselves a sanctuary for illegal aliens and to use boycotts, strikes and nonviolent civil disobedience. In short, Modesto’s gathering is yet another bitter fruit of the Marxist-Modernist ideology of liberation theology, which has already set several Latin countries ablaze.

Modesto was the movement’s first gathering in the US, following three world conferences, two in the Vatican in 2014 and 2016 and another in Bolivia in 2015. The previous conferences included Joao Pedro Stedile of Brazil’s “Landless Rural Workers Movement” who promoted invasions and occupation of farms and rural properties and Argentine Juan Grabois, a neo Marxist activist. It was during the gathering in Bolivia that socialist President Morales gave Pope Francis a crucifix with the hammer and sickle.

Among all of the conference’s co-sponsors, Pope Francis singled out PICO for praise in his written message. Founded in 1972 by Jesuit priest John Baumann  PICO supports many positons that are, or at least once were, in direct opposition to Church teaching. Baumann, after his first year of theological training was assigned to the field in Chicago where he met Saul Alinsky who Baumann describes as a “fascinating person. The way he could describe the importance of how to make democracy work and the importance of bringing people together was remarkable.” Baumann spent his time in the field working under the direction Tom Gaudette, an Alinsky lieutenant who became his mentor over the years.  Gaudette went to work for Alinsky on Chicago’s west side, organizing the Northwest Community Organization (NCO) in 1961, one of the hallmark Alinsky community organizations in Chicago.

“Being a wonderful person doesn’t mean you will be a wonderful pope. Any Catholic who tweets, “Inequality is the root of social evil,” as Pope Francis did last March, should be a socialist prime minister, not a Christian leader. The moral message of every Bible-based religion is that the root of evil is caused by poor character and poor moral choices, not by economics. The pope’s tweet is from Marx, not Moses.” Dennis Prager