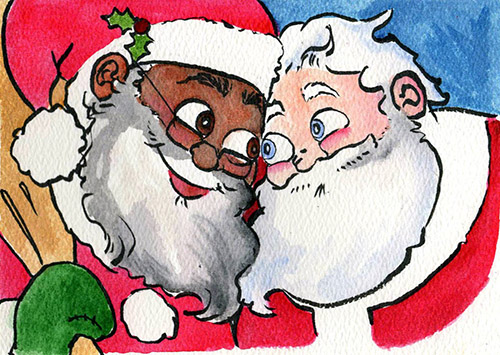 A new picture book will depict Santa as a gay man in an interracial relationship, publisher Harper Design confirmed Tuesday.

The book, Santa’s Husband, goes on sale Oct. 10 and tells the story of a black Santa Claus and his white husband who both live in the North Pole. Santa’s spouse frequently fills in for his husband at malls, according to a description of the book Harper Design provided to TIME.

Daniel Kibblesmith, who is a staff writer for The Late Show with Stephen Colbert and co-author of How to Win at Everything, penned the parody children’s book after tweeting in December that he would only tell his future child Santa was black. “If they see a white one, we’ll say ‘That’s his husband,’” Kibblesmith wrote.

Harper Design said the book is meant for all ages.

2 comments for “Another Children’s Story Perverted”