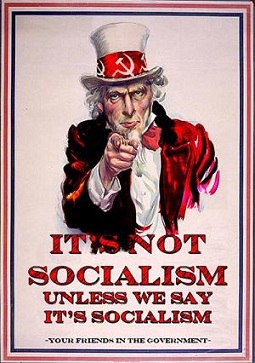 In 1917 Viadimir Lenin imposed socialism on Russian in only a matter of months.  Swept along by revolutionary fervor and the mandate of Marxism, Lenin  confiscated landed estates, nationalized banks, criminalized stock and bond sales, and took control of small industrial enterprises.  It was the “closest example of full-blown theoretical socialism the world has ever seen” said economists Peter J. Boettke and Peter T. Leeson.  “And, the most disastrous.”    By 1921,  Soviet economic output dropped to 14% of the pre-1917 level and Lenin had to stage a tactical retreat with his New Economic Policy that allowed for a partial market economy to operate.

It took China 30 years of applied socialism and the death of millions before Chinese leaders took their first faltering steps in 1978 toward economic liberalization.  At that point, the average wage in China was around one dollar a day.

100 years of socialism has proven it to be a failure.  Whenever central planning and state control have taken the place of private ownership and market forces, the result has been the same.  A descent into poverty.

Tanzania’s president Julius Nyerere declared war on poverty in 1965, designating  socialism as the means by which the struggle would be won.  President of a one party state, Nyerere had the means to achieve his socialist solution. During his rule, his government nationalized land, banks,  established some 4,000 government corporations,  and set prices on some 3,000 consumer goods.  With over 30 years to achieve his socialist dream, with financial aid from the West and from China totaling nearly $20 billion, his attempt was a spectacular failure.  The war on poverty was lost.  Under his socialist government some food crops such as corn, which was once exported, had to be imported to help feed the nation.    Pastor Christopher Mtikia remembered how widespread hunger prompted Nyerere to go on the radio and tell his nation that “we should tighten the belts, then the hunger would not be felt, because the stomach has been made small.”

He resigned the presidency in 1985 and summarized the outcome of his socialist experiment in his farewell address – “I failed, let’s admit it.”

The nearly 60 African and Arab Third World Nations that had embraced Socialism by the 1970s achieved similar results.   There was scarcely any economic robust growth and many suffered stagnation or even decline.  The result had been the same in Latin America.  Food is rationed in Cuba, and Venezuela rations not only food but water and electricity.  Without investment to build new plants and introduce more efficient technologies, living standards decline. The Venezuelan government imposed electricity rationing in 2009 in large part because of under-investment in its electricity infrastructure.  While Chavez blamed his nation’s hydro-electric power shortage on an El Nino drought, economic analysts Daniel Wagner and C.J. Redfern suggested that a lack of investment was more likely to blame. “In Venezuela, less than a quarter of the $643 million budgeted for electricity infrastructure projects between 2001 and 2005 was actually spent, and less than 10% of the additional electricity generating capacity deemed necessary for the country’s growing population 10 years ago has been realized.”

Sweden, often touted as a socialist success story, conforms to the pattern of penury.  While Sweden enjoyed a per capita income almost equal to the U.S. in the late 1960s, growth stalled after it became a cradle-to-grave socialist state.  Personal tax rates of 65 to 75%, high business taxes, restrictive labor regulations, and government debt that ran to 71% of GDP by 1993, combined with other factors to bring economic growth “to a crawl”, according to economist Richard Rahn.  Per capital income in Sweden is now just 80% of that in the U.S.  The Nordic nation fell from 5th to 14th place in the Organization for Economic Cooperation and Development “prosperity index” between 1970 and 2003.

Socialism brings economic decline because it does away with profit and private property, thus eliminating both the incentive to produce and the information needed for realistic prices and rational economic decisions.  When government dictates prices and production quotas, true economic activity becomes impossible.  Without the information proved in a free market by prices and profits (and losses), economic calculation becomes impossible.  Austrian economists Ludwig von Mises said that with Socialism “there is only groping in the dark” as central planners, deprived of the demand and scarcity signals provided by free market prices, try to allocate resources, determine needs, and set prices.   Without these signals, a  Socialist system has no gauge to measure success or failure.    Under Socialism the rate of investment drops, capital formation suffers, capital stock declines and innovation grinds to a halt.

Writing in 1990, scholar Tom Palmer described the aging and decrepit condition of Eastern Europe after decades of Socialism.  “Most of the textile mills in eastern Czechoslovakia were built before the first World War.   They still operate with the original machinery.  In East Germany, many of the buildings seem not to have been painted since 1945.  In some cases, no one even painted over the old and faded Nazi slogans on the walls.  In the Soviet Union, there are chemical factories built 110 years ago that are still producing the same chemicals in the same way.  It is a general principle that under Socialism, no factory is ever closed.”

The paralyzing influence of central planning also takes its toll on innovation.  In 1989 economists Milton Friedman wrote that  even in the most free economy of the U.S., areas most heavily controlled by the federal government – the post office and schools – are also the ones “mired in outdated technology.”

While private property creates incentives for conservation and the responsible use of property,  public property encourages irresponsibility and waste.  If everyone owns an asset, people act as if no one owns it.  And when no one owns it, no one really takes care of it.  Public ownership encourages neglect and mismanagement.

Socialism promises prosperity, equality and security but it delivers poverty, misery and tyranny.   It fails because it kills the human spirit.