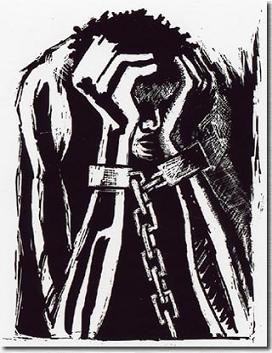 It took strong, centralized power in D.C. to create, sustain and protect the institution of slavery.

Most Americans believe the liberal narrative that states were the power behind slavery and as a result,  opponents of decentralizing the U.S. system, use the slavery issue as a club to bludgeon “states’ rights” advocates into submission. Many Americans won’t even consider returning authority back to the states, nullifying unconstitutional acts, or talking about state sovereignty, because they don’t want anything to do with the slavery associations.  In truth, the nationalists and centralizers own slavery’s legacy.

Slavers understood they needed a powerful centralized authority to protect the institution even before the Constitution was ratified. In fact, powerful South Carolina Philadelphia Convention delegate Charles Pinckney presented a plan for the new government early on. It was overshadowed by James Madison’s Virginia plan and got little attention. But like Madison’s vision, Pinckney yearned for a strong central authority.  Historian H. Robert Baker points out that the South Carolina delegation “proved among the most trenchantly nationalist during the secret convention and public ratification debates.”  Pinckney left no doubt as to his feelings on “state sovereignty” during the Convention.

“The idea, which has so long been falsely entertained of each being a sovereign State must be given up he said, “For it is absurd to suppose there can be more than one sovereignty within a government.” Pinckney contended that the states would retain “nothing more than mere local legislation.”  He and many of his southern delegates recognized a strong national government was necessary to maintain an environment friendly to their economic interests, and those interests intertwined with slavery.

The nationalists didn’t get what they wanted in the Philadelphia Convention. As ratified, the Constitution limited federal power, and left most authority to the states and the people. But southern interests did succeed in constitutionalizing slavery, explicitly in Article 4 Sec. 2, the fugitive slave clause.

From the moment of ratification forward, southern slavers would rely on federal power and centralized authority to enforce the fugitive slave clause and maintain the institution of slavery, even as free northern states appealed to their state sovereignty to protect their black citizens.

The U.S. Congress passed the first fugitive slave act in 1793. The Act dictated that the ‘owner’ of an escaped slave could “seize or arrest” the fugitive and take him before either a federal judge, or a city, county or town magistrate. “Upon proof to the satisfaction of such Judge or magistrate,” the official was required issue a certificate of removal. Oral or written testimony by the ‘owner’ or his agent was sufficient proof. The act also provided penalties for anybody interfering with fugitive slave rendition.

Many northern states passed liberty laws, specifically meant to protect free blacks from kidnapping. These state laws generally acknowledged federal authority, but added additional conditions dictated by the state. Some required jury trials, others set up additional proof requirements before removing a fugitive from the state. Northern lawmakers argued that while the Constitution requires the return of fugitive slaves, state sovereignty meant they had the authority to impose their own conditions to protect the basic rights of their citizens. Slavers vehemently disagreed and constantly agitate for more federal intervention to protect their “property interests” from state interference.

Pennsylvania was on the forefront of personal liberty legislation designed to protect black citizens. The state legislature passed an anti-kidnapping bill in 1820 and strengthened it in 1826. Supporters invoked the idea of state sovereignty to defend the legitimacy of the legislation.  Things came to a head in Pennsylvania in 1842 when a fugitive slave case went all the way to the Supreme Court.

At issue was the snatching of a woman and her child from Pennsylvania by Maryland slave catchers. Margaret Morgan lived free in Pennsylvania for many years after her ‘owner’ set her free, but he  never formally manumitted her, and his widow eventually decided she wanted to reclaim her ‘property.’ When Prigg took Morgan and her child back to Maryland, he failed to follow the procedures in Pennsylvania’s personal liberty law. The state eventually served Prigg with an arrest warrant for kidnapping. He asserted the Fugitive Slave Act of 1793 trumped Pennsylvania s law, and held that the state had no authority to interfere with his slave rendition.   On an interesting side-note, the child was born in Pennsylvania and technically free. The Court never even considered this aspect of the case. Morgan and her child both disappeared – likely sold further south.

Revered nationalist Justice Joseph Story wrote the majority opinion. He agreed with Prigg. Story held that Congress had the sole authority to legislate in the matter of fugitive slave rendition, and state governments couldn’t interfere in any way. This prohibition of state action included state laws designed to protect free blacks from kidnapping.

It was a mighty blow to state sovereignty and a victory for slavers. They were assured that the federal government would bring its full force and power to bear to protect their institution.  Simply put, fugitive slave rendition depended on federal backing.

Story used the case to extend federal power in another way. He held that states had the authority to order their state officers to refuse to participate in fugitive slave rendition, essentially leaving the issue exclusively in federal hands. In other words, Story cared more about nationalism and extending federal power then he did about protecting the rights of black people.

Story claimed he was not creating any general rules of interpretation in Prigg, but he clearly intended to expand federal power. A letter Story wrote to Georgia Senator John Macpherson Berrien lends credence to this assertion. He suggested that the federal government should step up its general provision for law enforcement and allow federal judges appoint commissioners to act in all cases where federal law was currently left to state officers.  Story specifically mentioned to the Georgia senator that these commissioners could handle fugitive slave cases, a clear carrot to bring a slave holder in line with expanding federal authority.

The institution of slavery needed national power to survive, and ardent nationalists were more than happy to sacrifice the rights of blacks for the opportunity to expand Washington’s authority.  The Prigg decision ultimately led to the even more draconian Fugitive Slave Act of 1850. The new law explicitly denied the accused any due process rights.

Northern states rebelled. Asserting state sovereignty, they passed aggressive personal liberty laws to thwart execution of the act, making it necessary for a fugitive slave claimant to abide by state process or risk persecution as a kidnapper. In support of their stand, apologist appealed to the notion of “states’ rights,” sometimes directly quoting arguments advanced by John Calhoun during the “Nullification Crisis” spurred by southern resistance against the “Tariff of Abominations” in the late 1820s and early 1830s.

These personal liberty laws elevated state sovereignty above federal authority, and asserted the right and duty of a state to reject unconstitutional acts In order to protect the basic rights and liberties of their people. Northern states simply ignored the Supreme Court opinion in Prigg and interposed for arresting the progress of the evil that was the Fugitive Slave Act of 1850.

It took centralized power to maintain a system of slavery in the United States.   Nationalists used slavery to expand federal power, and slavers depended on the nationalists to protect their interests.  Northern abolitionists championed state sovereignty. They ignored Supreme Court opinion, defied federal authority and nullified the fugitive slave acts.

You can read the article in full at the Tenth Amendment Center at this link.