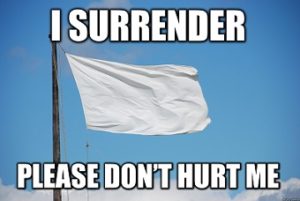 Confronted with monthly terror attacks, and areas in French cities where non-Muslims are not allowed to traverse, French voters overwhelming chose SURRENDER. The voters rejected an imperfect candidate in Marine Le Pen who presented a plausible and moral plan to contain the cancer of radical Islam choosing instead to go with Emmanuel Macron, an off-the-shelf crony socialist who favors open borders and denies the existence of French culture.

The nation’s largest Catholic newspaper, La Croix, endorsed Macron and the head of the French church welcomed his election. Meanwhile, Catholics in Iraq and jihadist occupied Syria faced burned out and blackened churches and a life sentence  to be served in refugee camps. So why do the French Catholics welcome Islam?  Do they truly see it as a religion of peace?  Perhaps they are simply delusional cowards and fools.

Catholic priest, Henri Boulad, the leader of all the Jesuit priests in Egypt, responded to the election of Macron and the rise of Islam in Europe by seeking citizenship in Hungary, a country whose conservative president has refused to accept Muslim refugees. Boulad said he hoped his move would “signal” that Hungary made the right decision.
According to Boulad, all those who wish to think the best of Islam, whose fear of “phobia” overpowers their rational faculties, can draw on the part of Quran that Muhammad supposedly received while living in Mecca. At that point he was still a marginal, little-heeded mystical preacher, surrounded by pagans, with a message of tolerance and peaceful coexistence among Muslims, Christians and Jews.

It was only later, once he ruled the city of Medina as an absolute monarch that he started “hearing” different messages that told him to “slay the idolaters wherever you find them; arrest them, besiege them, and lie in ambush everywhere for them.” He began to call for Islamic wars of conquest and presented “Paradise” as the reward for those who died in the course of jihad, and plunder and sex slaves for those who lived.

Islam’s other “sacred” documents such as the Sira (the life of Muhammad), the Hadith (collections of the words and deeds of Muhammad), and the various law manuals confirm the violent teachings of the Quran. These books give us a fuller picture of Islam than does the Quran, but in no way do they soften or reinterpret the violent passages. If anything, they cast doubt on the peaceful passages. The Islamic doctrine of abrogation, which is based on Sura 2:106 of the Quran, holds that if two passages in the contradict each other, the later verse cancels or abrogates the earlier verse. Since most of the peaceful c verses come from the early Meccan period, many Muslim authorities hold that they are superseded by the latter violent verses.

The late Ayatollah Khomeini was in the habit of saying things like, “Those who know nothing of Islam pretend that Islam counsels against war. Those are witless…”Islam says: “Whatever good there is exists thanks to the sword and in the shadow of the sword! People cannot be made obedient except with the sword!”  And yet in 2014,  Pope Francis said that equating Islam with violence was wrong and called on Muslim leaders to issue a global condemnation of terrorism to help dispel the stereotype. As Pope Francis asserts, it is possible to read the Quran as being “opposed to every form of violence.” We know it is possible because that it is the way that some have read it. However, to say that this reading is the  “authentic” one is debatable, even misleading. At a time when clarity about Islam may be a matter of life or death for many Christians, the Pope’s statement may, unfortunately, only further cloud the issue

Rome declared in its 1994 Catechism of the Catholic Church that Muslims are included within God’s plan of salvation because they ‘acknowledge the Creator,…profess to hold the faith of Abraham, and together with [Christians]…adore the one merciful God.    Strange. Allah is not the triune God of the Old and New Testaments. Islam does not accept the trinity, and denies that Christ is the only begotten son of God, and denies that  Christ died on a cross as a sacrificial lamb for his people’s sins and rose again on the third day. Yet according to the Catholic Churches statement above, in spite of their unbelief, Muslims are still salvifically related to the People of God and may go to Heaven as Muslims.

In countries under Islamic law, conversion to Christianity or any other religion for that matter is an apostolic crime. In Saudi Arabia, churches are forbidden. In the marginally more open sheikhdoms, Christian practice is strictly controlled. In Iran, where Christians and Jews are officially tolerated as “people of the Book,” the Islam government not only denies the Holocaust but wants Israel “wiped off the map.” In Iraq, as many as half the country’s Christians have fled because of wars and persecution. It is hard to imagine any of those Muslim states being so eager to please a Catholic Pope that they would bow to the sensitivities of Christians or Jews the way the West bows to Muslim sensitivities.

“Whoever knows the Old and New Testaments, and then reads the Quran, clearly sees the process by which it completely reduces Divine Revelation. It is impossible not to note the movement away from what God said about Himself, first in the Old Testament through the Prophets, and then finally in the New Testament through His Son. In Islam all the richness of God’s self-revelation, which constitutes the heritage of the Old and New Testaments, has definitely been set aside. Some of the most beautiful names in the human language are given to the god of the Quran, but he is ultimately a god outside of the World, a god who is only majesty, never Emmanuel, God-with-us. Islam is not a religion of redemption. There is no room for the Cross and the Resurrection.” Pope St. John Paul II

Source: Are Western Apologists for Islam Today’s Useful Idiots? By John Zmirak at Stream.Org; Looking At Islam Through Catholic Eyes; and Do Catholics and Muslims worship The Same God?