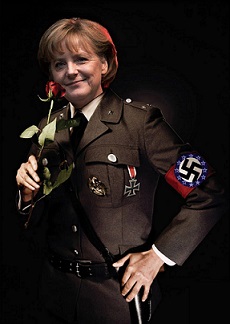 Der Spiegel Online revealed recently that they had seen documents that proved that Germany’s federal intelligence service, the BND, had spent at least nine years spying on American corporations and on government targets that included the White House, the State Department, the Treasury Department, the Air Force, the Defense Intelligence Agency, the Marine Corps, NASA, Lockheed Martin, several universities, Human Rights Watch, over a hundred foreign embassies in D.C. as well as international organizations that included the International Monetary Fund and the Arab League.  During the same period, according to the article,  BND also spied upon scores of foreign journalists around the world including the BBC, the New York Times and even a Reuters journalist in Afghanistan, along with local reporters in Zimbabwe, Kuwait, Lebanon and India, and news agencies in Germany.   Merkel denies these accusations and supports previous statements of the BND leadership that the agency is, but of course, innocent and any data collected regarding Americans was captured only “coincidental” and has since been deleted.

Of course every country spies on other countries so should we even care?  Obama spied on everyone, including American citizens and the NSA, well, it continues to spy on everyone, along with the police, the FBI, the CIA, ad nauseam.  But, not every country has a central intelligence agency that has long been controlled by Nazis.

The precursor of the BND was founded during WWII and led by Major General Reinhardt Gehlen to collect information on the Red Army. Working with occupation forces after the war, Gehlen set up his own organization, the Gehlen Organization, aka “The Org” which was funded and equipped by none other than the CIA and staffed by Gehlen with former Nazi SS, Gestapo agents and Nazi sympathizers, especially from the Soviet East. During his time as head of the organization, Gehlen helped fugitive Nazis, including Adolph Eichmann, hide from justice. In 1956 The Org magically turned into the BND and became part of the West German government, Nazi employees and all. With Gehlen still at its helm until 1968, they continued recruitment of former Nazis including the “Butcher of Lyon” Klaus Barbie.

Are fears of Germany justified as the twenty first century unfolds?  Will a Fourth Reich rise?  The German war machine of WWII stands unequaled in modern Western civilization for its efficiency, destructiveness, brutality, and evilness.  Is it even possible it could happen again?

In 2002 the German General Staff, responsible for the continuous study of all aspects of war and for drawing up and reviewing plans for mobilization or campaigns, was revived under its old name as it was known under the Nazi regime – the Command Staff of the Armed Forces, with its headquarters centralized in the old imperial capital of Berlin. In 2003, the German security services, the BND, and the secret police were consolidated as a single centralized service, also based in the old Reich capital.

As Germany assumes more responsibility for Europe by providing funds to floundering neighbor economies, they appear more than ready to become the schoolmaster of Europe, telling other nations how to manage their budgets and run their countries.  As their influences grows in Brussels other nations in Europe are beginning to notice that Germany is calling the shots.   The world is beginning to witness a major power shift from Brussels to Berlin and from France to Germany which could have important consequences.  German leaders are also attempting to point Germany in a old well used direction toward expanding their military operations on a broader scale, suggesting that since they took the lead in addressing the financial crisis, they should lead the way in military cooperation for the defense of Europe.

The EU started as an attempt to draw the nations of Europe together as equals, to prevent future wars.  However, the financial crisis advanced and concealed Germany’s rise and German dominance has created a hierarch in Europe instead of equal participation.  If a crisis does develop over the euro or a potential fracture of the EU, European leaders could suspend agreed upon rules and allow Germany to act on its own in an attempt to the “savior” of Europe.  German sociologist Ulrich Beck warns that actions spurred by impending crisis could have “unintended consequences” and “result in the birth of a political monster.”

The fear of German hegemony in Europe is likely nowhere so great as it is in France, which was at least partially occupied by its neighbor three times during an 80-year period. In recent years, “Germanophobia” has increased dramatically across the political spectrum, from Front National to the leftist wing of the governing Socialists. That has partially served to distract attention from political leaders’ own failures to implement reform, but they are nonetheless sentiments that deserve to be taken seriously.

The leftist French intellectual Emmanuel Todd warns that Germany is “increasingly pursuing politics of power and of hidden expansion.” Europe, he says, is being ruled by a Germany which, in its past, has constantly fluctuated between reason and megalomania. Since reunification, Todd says, Germany has brought a huge area of Eastern Europe under its control, a region once under the influence of the Soviets, to use it for its own economic aims.