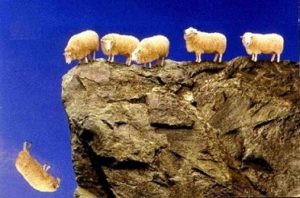 “The greatest threat to the constitutional right to vote is voter fraud.” Lynn Westmoreland

The issue of voter fraud was one of the most heated sources of controversy during the 2016 election and continues to be so. After Hillary’s campaign announced that they were supporting recounts in several states they lost, Trump responded with a series of Twitter posts accusing them of hypocrisy for refusing to accept the results of the election, and in usual fashion, added that in addition to winning the Electoral College, he would probably had won the popular vote if they deducted all those votes cased illegally. Is that true?

According to the far-left Brennan Center for Justice, Trump’s claims are lies – voter fraud is rare, voter impersonation nearly non-existent and much of the problems the right associates with fraud is just unintentional mistakes by voters or election administrations. Really! What about those early voters in Texas who found that their votes for Trump magically changed to votes for Clinton through what officials claimed was a “software glitch?” Or that article in the Washington Free Beacon reporting they had uncovered 141 counties with more people registered to vote than were eligible to vote? Or that former JMU student charged with voter fraud for submitting fraudulent voter registration forms to the Harrisonburg registrar through HarrisonburgVotes?  Or that series of undercover videos by James O’Keefe’s Project Veritas which revealed Democrat operatives admitting that they routinely engage in voter fraud in order to win elections by hook or crook?

A Cooperative Congressional Election Study funded by Harvard, originally designed to dispel claims of wide spread voter fraud, actually proved otherwise. The findings of academic researchers located throughout the U.S. found that enough illegal votes were cast in 2008 to turn the tide in close races to favor Democratic candidates and provide them with victories. Based on samples, they claim that Obama “won more than 80% of the noncitizen vote.

Groundbreaking studies by professors at Old Dominion University, using data from the Harvard study, concluded that in 2008 as few as 38,000 and as many as 2.8 million noncitizens voted. Just Facts, a widely cited, independent think tank led by self-described conservatives and libertarians, also examined the study and settled on much higher numbers, estimating that as many as 7.9 million noncitizens were illegally registered in 2008 and anywhere from 594,000 to 5.7 million voted. For 2012 3.2 million to 5.6 million noncitizens were registered to vote and 1.2 million to 3.6 million of them voted.

There is also hard evidence outside of polling that noncitizens vote. Activists in Maryland and Virginia found thousands of illegals were registered . They also found 40,000 voters registered in both Maryland and Virginia. The Public Interest Legal Foundation, which fights voter fraud, released one of its most comprehensive reports finding that Virginia removed more than 5,500 noncitizens from voter lists, including 1,852 who had cast more than 7,000 ballots. The Foundation says there are likely many more illegals on Virginia’s rolls who have never admitted to being noncitizen.

Maryland officials found thousands registered to vote and some who had voted  in just one county that claimed on jury forms they were not citizens. Kansas found over 22,000 illegals registered to vote. A Florida former mayor was indicted and convicted of forging signatures on ballots. A Texas county Constable was sentenced for voter fraud for “assisting” nursing home residences, including those with Alzheimer’s, with mail ballot applications and in Dallas County, Texas , at least 17 dead residents applied for ballots. And that is only the tip of the ice berg.

The study’s findings also fall in line with a recent audit by the State Board of Elections for North Carolina which found that out of the 10,000 voter citizenship cases they looked into, over 14% were “likely noncitizens.” Obama won the state by only 14,177 votes so a turnout of only 5.1% of N.C.’s adult noncitizens would have provided his victory.

The number of noncitizens who voted illegally in the 2016 election may be significantly higher because the of number of illegals in the U.S. has increased around 2 million since 2008. Remember, when Trump promised, during the campaign, to crack down on illegals, Obama reminded illegals that they had little chance of being caught since election records were not cross-checked against immigration databases. Also in early 2016 Obama supported a court injunction to prevent Kansas, Alabama, and Georgia from requiring people to provide proof of citizenship in order to register to vote.

“Voter registration rolls in some states are in sad shape. They are filled with large numbers of individuals who are ineligible to vote because they are dead, have moved away and registered in a different state, or are not U.S. citizens. Such inaccuracies can be exploited by fraudsters who would rather cheat to achieve their political objectives, knowing that many states have lax procedures that make it extremely likely that they can commit voter fraud and get away with it. This is not just a crime against our electoral system, but against American citizens. Every fraudulent ballot that is cast negates the vote of a legitimate voter, effectively disenfranchising that voter.” Election Law Center