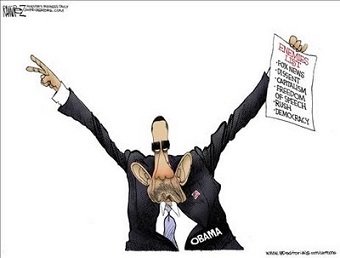 American citizen, the majority of you are grotesquely ignorant.

On the whole, your society exemplifies Webster’s definition of the word oblivious: lacking remembrance, memory, or mindful attention; and,  lacking active conscious knowledge or awareness.

Your food, if you can call it that, is served to you through a window while you sit in your automobile.  If you don’t want to work, no problem, the government is happy to provide for you.   Your friends are not friends, but faces on a screen or names on a website.  You likely have thousands of them but few meaningful relationships.

The United States is the Roman Empire, and bread and circus rules the populace.  If you think this is untrue, consider how ignorant politicians holding the highest offices in the Nation believe you to be.  We elected Obama on platform of lies:  ending war; restoring liberty by undoing the police state and giving average Americans more paths to greatness.  During the entire campaign he made television appearances and insulted your intelligence by singing to you about the value of further empowering the increasingly something-for-nothing college scam; or trying to convince you that Islamic terrorists have more bark than bite.  He even told you he was going to take everything you had and redistribute it to the pockets of left-wing dictators and tyrants around the world and you cheered.

Now you have a new president who is attempting to undo most of Obama’s left-wing agenda but are you grateful?  NO, you’re still fighting over imaged wrongs or unelected candidates who dropped out of the last presidential race, rather than joining forces to take the fight to the real enemy.  You’ve fallen prey to the ultimate deception of division.

When Obama was elected, some of you,  realizing how bad things really were and how much worse they would get, attempted to force changes and reforms.  You started the Tea Party, you attended rallies and elected new politicians to change government from within.  Others among you joined Occupy Wall Street and began to call for a removal of corporate and special interests in government.

The elites recognized the call for change from both groups and quickly acted — but not in your favor.  They mobilized their paid for mainstream media to make you — the idiot — believe that Tea Partiers were all right-wing, racist, women-haters and that all OWS activists were baby-killing, anarchist queers.   After polarizing both movements with social stigma, members were easily assimilated by the Republican and Democratic establishment as useful idiots for both sides.  The only thing both parties embraced was playing the race card and Islam.

What if you weren’t dumb and realized that by building on common ground rather than fighting over ideological differences suggested by the left-wing media, you might have a chance to topple the political establishment and its false left-right paradigm?  That would be bad news for the powerful elite who control your money and your life and who have worked so very hard to make you stupid.  If people who think they are on opposing sides of the political argument were to ever wake up and realize their propagandized realities, they could rise up together and put America back on a Constitutional footing.

The “us versus them” you see, has nothing to with contention between average Americans no matter what political ideologies they follow.  “Us” is me, you — the idiots — and “them” is the group of elite power brokers that push and prod us through the media and fiat money that they control.  They are the ones with the shiny objects and, Americans love shiny objects.

← A Climate of Fear Created by Tyrants (Liberals)
Sin: Shocking to Amusing →