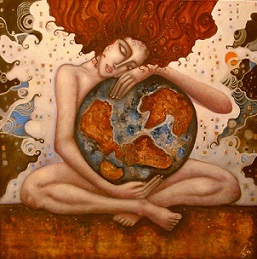 In this delusional time, the murder of an innocent unborn baby is celebrated and the assisted demise of the disabled and the elderly is pursued but God forbid we stomp on a cockroach!

In 2008, Ecuador became the first country to include Rights of Nature in its Constitution giving personhood status to all sorts of disgusting viruses, bacteria, insects and assorted creatures and forestland.  Laugh if you must but two years after these rights were granted,  the Vilcabamba River hired an attorney, sued a developer and won. Bolivia also jumped on the insanity wagon and passed The Law of Mother Earth, granting nature the right to life.   New Zealand soon joined the nut brigade and granted  rights of personhood to the Whanganui River which the Māori tribe believed to be their ancestor.  Not to be left out, India granted legal rights to the  Ganges and Yamuna river and later expanded the same rights to glaciers, rivers, streams, rivulets, lakes, meadows, dales, jungles, wetland, etc.

Colombia’s Constitutional Court granted “biocultural” rights to the Atrato River. According to that ruling, the human species is nothing special nor are they in any way the owner of other species, biodiversity or natural resources, or the fate of the planet.  The Socialist and Green movements in Spain are working on obtaining the rights to life, liberty and freedom from torture for great apes and devolve humans into a “community of equals” with chimpanzees and gorillas.  And the European Court of Human Rights actually accepted an appeals case from Austria that refused to recognize chimpanzees as people. Even Switzerland has gone so far as to constitutionally establish the “intrinsic dignity” of plants.

It would be funny if it weren’t so scary. Environmentalism and sustainable development is all based on pagan Gaia worship which claims that earth is an ancient goddess spirit, that must be protected because humanity is nothing but an invading “pestilence” to be squashed beneath the sandals of the unwashed environmental masses.  There is no God and therefore humans are just another species in the evolutionary process with no unique dignity or special status on earth.

In case you haven’t been paying attention, we have our own nuts right here in America. Since 2006, thanks to the United Nation’s Agenda 21, more than 40 municipalities that include Santa Monica, Pennsylvania, the Ho-Chunk nation of Wisconsin, Maryland, Virginia, and Maine, etc. have empowered legal representatives to litigate on behalf of nature.  A  California group is pushing for changes to the U.S. Constitution, that includes a new amendment that guarantees “Nature’s rights.”   The U.S. Constitution, the group says, should include a section entitled “Human Community Laws of Nature,” declaring that Nature is a freely living being with inalienable rights and that no individual, business entity, government, `owner,’ or organization shall inflict violence or servitude on her,” according to a working document posted online.

Deep Green Resistance recently filed suit in federal court as “next friend of the Colorado River Ecosystem” asking the court to grant personhood status to the river. Deep Green believes the Colorado should have the right to stand up for itself to ensure its future existence because existing environmental laws have failed to stop global warming, pollution of water and the decline of every major ecosystem on the continent. Oh, and they want the court to grant them guardianship so they can sue for big money. It always comes back to money doesn’t it?

Talk about a full employment guarantee for lawyers! Just image the judicial backlog if “nature” could sue every time a person wanted to do something on his own private property. Image the impossibility of obtaining liability insurance to protect yourself from being sued every time you had to cut down a tree, drain a pond, mow your grass; destroy invasive weeds or, heaven forbid, squash a bug!

And don’t think for one moment those ambulance chasers aren’t going to help push this trend. Their first annual “Rights of Nature Symposium” will be held at Tulane Law School on October 27 in New Orleans, sponsored by the International Center for the Rights of Nature, a project of the community environment legal defense fund of the Myrin Institute. The Myrin Institute founders believe, according to their web site, that a reconciliation of the modern scientific attitude with a spiritual world concept is the most essential need of modern man to open the way for a philosophy of freedom to protect society from destructive ideologies. Who is going to protect us from the destructive ideologies of the Myrin Institute?

Trees, rivers, mountains, germs, viruses, bacteria, plants, snails, cockroaches, etc. do not have rights nor are they capable of recognizing the rights of others. A mountain slide that uproots a small pine forest does not violate the rights of the tree community. Even if the mountain slide kills humans, it does not violate human rights. The mountain is not guilty of reprehensible behavior and one cannot bring it to be shamed in a court of law. Legal rights correspond with legitimate claims and entitlements.

“Rights, properly understood, are moral entitlements embodied in law to protect all people. They are not earned: Rights come as part of the package of being a member of the human race. This principle was most eloquently enunciated in the Declaration of Independence’s assertion that we are all created equal and endowed with inalienable rights to life, liberty, and the pursuit of happiness.” Wesley J. Smith